Tackle It Tuesday: Getting Ready For The Holidays Pt. 1

So everyone knows that Steve and I are "Christmas People." We love the holidays and get so excited about it every year. We even got married four days before Christmas and love going out for our anniversary and doing stocking stocking shopping for each other that night.

So with the personal turmoil 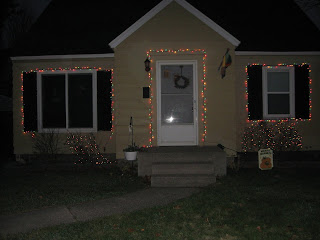 we are in the midst of, I decided that I NEEDED Christmas even earlier than usual this year. It was warm out a few weeks ago so I took advantage and got (almost) all of the lights up on the house. Steve told me I couldn't light them yet. But I kept at him and we finally turned them on last week. Our house looks like a landing strip coming down the street since we're the only ones lit up, but that's okay.


Because I went psycho with painting a few months ago, our living room looks so nice now that I have been looking forward to adding some "festive" touches this year.

We leave one lighted garland up all year round along the top of the hutch. Kind of our way to keep Christmas all year long. 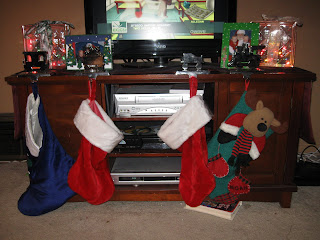 But I hung the stockings 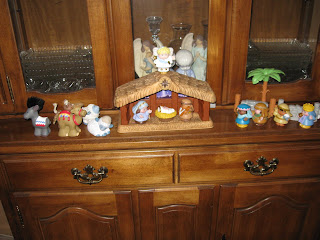 pulled out the "play" nativity

Started pulling out the "real 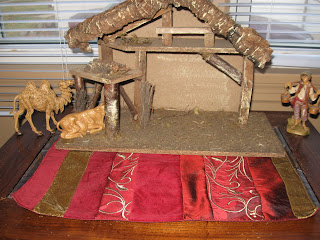 " nativity, but I am actually pacing myself on that one and only adding a piece every few days. It's driving Aaron crazy. 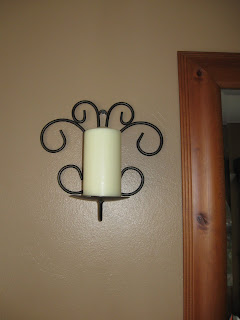 I have been after Steve for the entire time we've been in this house (7 years) to hang two sconces that I got as a gift from my mom in the living room. He finally did it a few weeks ago and I was very happy. 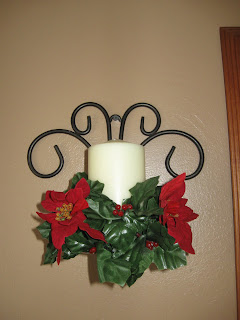 But I felt they needed a little more during my holiday mania. So I went to the store, planning to buy candle rings. I got dismayed when I found that the darn things were $5 apiece. No way! So I went to Michael's last weekend when everything was on sale and bought a long piece of (fake) poinsettia garland. When I got home, I broke out the glue gun and came up with these. 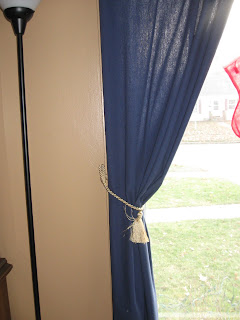 We've also had another quandary with the silly cat. Up until now, I have had the curtains in the front held back by ties with little fringe dangling. For some reason, the cat has decided that they are her favorite TOY and we have been finding them all over the house and then the tassels are getting destroyed as well. 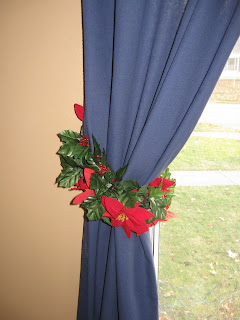 So I had a ton of the garland left. Breaking out the handy glue gun again, I made holiday tie backs. I know they're a little on the "gaudy" side, but don't most beautiful holiday displays have a little bit of "over the edge" to them anyways? 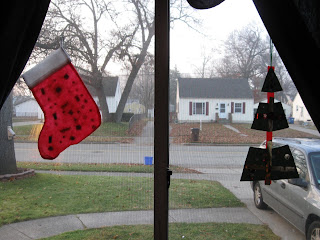 I also decided when Noah was in Kindergarten that even though they bring home all kinds of "art projects" during the holidays, there is usually one that is their best work and I am going to pick one piece of "art" from each kid each year to keep with the Christmas stuff to display each year. All the rest will go into their keepsake bins. So I have a wall hanging of Noah's hands from Kindergarten, a sequin tree from last year and a stocking from Aaron from last year. I thought it would be fun to put some of them on the front window.

So this is the start to the decorating of the the Wheelz home. You'll notice...not tree yet. For the first time since Noah was born, we decided we are going to not only get a REAL tree this year, but we're actually going to take the boys out and watch Daddy cut it down. A true Griswold moment. I'm sure an interesting post will result from that one in December. Stay tuned...

I hope you're all looking forward to wonderful family celebrations for Thanksgiving as I am. Have a great and restful holiday week.
Posted by Kristi at 4:15 AM

No decorating here yet.