So I have so much to tell you about that has happened since my last post. But I'm going to pace myself. 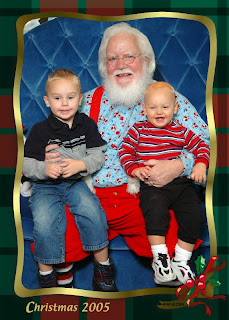 with the newest Santa thoughts in the Wheelz home.
I have been quite convinced that Noah no longer believes in Santa. He really stopped in Kindergarten when some Jehovah's Witness kids in his class made it very clear that the idea of Santa was evil (yeah, thanks a lot). But he has generally gone along with it, since believing in Santa means presents from both the big red guy AND mom and dad.

Last year he had given up believeing, but a little unintentional trickery with the lights timer changed his mind and he was absolutely convinced.

Fast forward to a couple of weeks ago when the authenticity of the Jolly Elf was again discussed. I have never actually told the kids that Santa is real but I have also never done anything to discourage the thought either. And we do visit him each year, just for the fun photo.


So I took the boys t 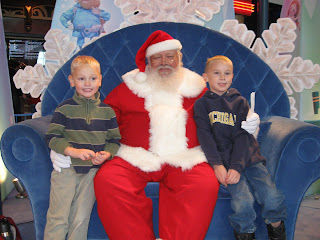 o see Santa last week. I picked Noah up from his half day of school and we headed to the mall for lunch and then the Big Visit. About five minutes before we went, I took the boys in to use the "family" bathroom and they started a little fight about something. I have no idea what. I managed to get it under control and we headed over to the "North Pole". There was no wait and the boys walked right up to him and settled in on his lap.


Santa asked them what they wanted and then looked at me as he continued to talk. He told the boys that his elves had told him that they had been fighting a lot lately and that they needed to stop. The boys were amazed! I suppose any human can see a mom with two boys close in age and assume that there are daily sibling battles, but all the boys saw was that there really are elves watching them and reporting back. Noah asked for his Star Wars legos and Aaron asked for his drum set and we went on our merry way. 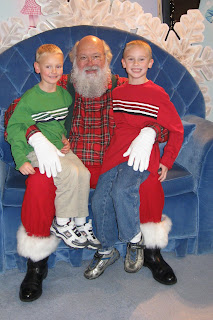 to Saturday night at our family Christmas. Noah got a hold of my niece's DS and played with it for at least an hour. On the way home from the gathering, Noah wanted to know if he could change what he asked Santa for so he could get a DS instead.

I told him that he would have to write a new letter, hoping to keep him working on his writing skills. (I'm always looking for ways to get him to practice writing neater...one of the things that came up in his conference last month).

Tonight before bed, this was his answer...

"Mommy, I don't have to write a new letter to Santa. If his elves knew that we were fighting, then they heard me say I want a DS instead of legos. They'll get the message back to him"

I guess I can't argue with that logic. And the authenticity of Santa remains true for yet another year.
Posted by Kristi at 6:19 PM

That's priceless. He's already figured out how to work the santa system.

I meant to comment the other day when I read this but... I didn't
The fact that your kids still like Santa is great,(I am a bit jealous) :) neither of mine have ever really enjoyed Santa... but they are VERY happy to sing Christmas songs and talk about Jesus's birthday--
So, I say all is good with us!