It's All About the Bathroom 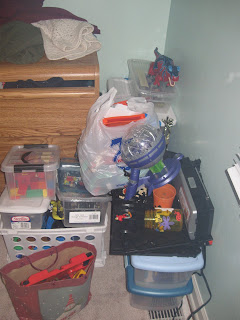 This post is in two parts (sort of). It begins with a double bathroom problem, and ends with Noah's first grounding. If you're interested, I invite you to read on...

When we first bought our house, it had a main bathroom (tiny) and a fake-ish bathroom (minuscule) plopped in the middle of the bedroom. After a year or two, we pulled the "fake" toilet out of our bedroom for more space, knowing that someday only having one bathroom would become a problem.

And it has become a BIG problem. Every morning three and sometimes all four of us need to use it at the same time. Every morning fights erupt over it. It has been even worse since both boys have been suffering from runny BM's (the D word) for over two weeks now, so they are wanting to sit on there forever.


So bathroom talk in this way has been a common in our home while we are trying to figure out how much we need to save enough money(yeah, right) to install a toilet in out basement. 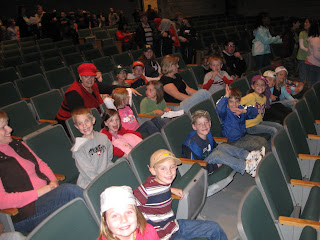 oys have entered a phase of nasty "bathroom" talk at the same time. You know... "p#@p", "b*tt" and that kind of thing. Noah got in big trouble last week at school for using the word "privates". I have tried to talk calmly with him about them, knowing that it is part of being a boy at this age.

Then, when I drove on the field trip yesterday, the entire group (three girls and Noah) were all going it full force with the bathroom talk. I put a stop to it and the response from one of the girls was, "That's okay, we'll just wait until second recess". Real assuring.

BTW, THIS is the reason I toyed with homeschooling when Noah was first starting out. I just have no control over the influences of others at school and it drives me insane

So once again. I decided to just let it go for now. Then at the end of church night last night, the CE director pulled me aside to tell me that Noah had again been talking inappropriately in class, making some of the class uncomfortable. I called the teacher he had that night to clarify what had happened and apologize to her personally for his behavior.

I will not go into details about the series of events following our arrival home last night, but I can tell you it was not my shining moment in parenthood. But at the same time, Steve agreed with me which always makes me feel so much better when he's supportive.

I did speak to Noah's 2nd grade teacher this morning, both to let her know what is going on on the playground, as well as to warn her in case Noah acts out today as a result of his punishments.

He will be spending the next three days/nights "grounded". We have never done this before, but I think it is time for some drastic measures if he is ever going to learn that I mean business when this subject is being dealt with. He will come home from school every day, go straight to his room and stay there until bedtime. 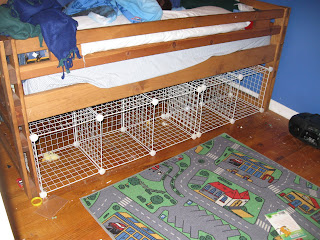 In case you think this may not be punishment enough, take a look at the shelves under his bed. Do you think they look bare? The picture at the beginning of this post is the pile of all of the toys that are kept in his room. They are now in a stack in my room.

I just wanted to send you a high five! I know that it is hard to go the distance with these kids, but sometimes they have to learn that the lessons we are teaching are important. Good luck with the grounding, I hope it goes well!

WAY TO GO!!! I am sooo proud of you!! I have done this with Busy Boy and it does work! BB is STILL earning toys back!

Keep it up!! Huge hugs and high fives!

Wow! Been there done that! You go mom! Just remember to stand your ground on the second day(usually the worst).

Train up a child the way they should go and when they are old they will not depart from it, Sister.

I have also had my non shining mommy moments and it is a time I can use to also show my children I can ask forgiveness. However, I am so proud of you for 'meaning business' and I know you will get great results.

I can just picture Noah using his fingers to be cars on that rug, ha ha.

Hang in there, Mama!!
xoxo,
Veronica

I hope it works and he gets the message. For your sake and his, hate to see what's up your sleeve next...lol. But seriously, job well done mom!