I posted about our Thanksgiving and Black Friday shopping experiences already. Go read them if you want to be jealous of the easiest Black friday experience ever.

The rest of the weekend was pretty much non event-ful so this is when it is fun to try to think of five things. here it goes 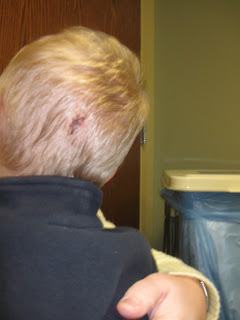 Although it bled when the 4th one came out, and Aaron cried in pain when he didn't when they went in, it is a relief to everyone that the healing can finally progress, including washing the nasty hair.

While I put Aaron down for a nap on Saturday (he needed one desperately), Steve took Noah to the library. He came home SO proud with his VERY OWN library card.

I don't like waiting until Christmas Eve to wrap presents so I locked myself into the bedroom after bedtime Saturday night and wrapped all of the presents. It made me realize that things are a little uneven leaning toward Noah so I need to get Aaron caught up on stocking gifts. Aaron is always harder to shop for. 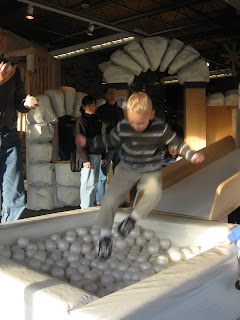 Yes, again we headed over since Deb was there for Hannah's birthday. The kids had fun jumping into a new penguin exhibit they have there. We realized after Noah's third mental breakdown that we hadn't fed him before we left, and ended up leaving less than an hour later with him in tears. Not the best time at the museum.

Noah woke up Sunday morning complaining about "hurting all over" but seemed okay. So off we headed to church, since our quartet had to sing in both services. After church, Noah was still going in and out of perfectly normal and zombieville, so we decided that we would go home, rest for awhile, and then go to Playworld. We are thankful that our former babysitter works there and slides us through to play.

We got home from church and the whole house smelled like natural gas so I herded the very tired and not so healthy boys back to the car while Steve stayed home to call the gas company. At Playworld, Noah laid on my lap for the first 45 minutes while Aaron went off to play. He did go play for a short while later, when I got the okay from Steve to bring the boys back home. The culprit was related to the dryer problem we have had for awhile. 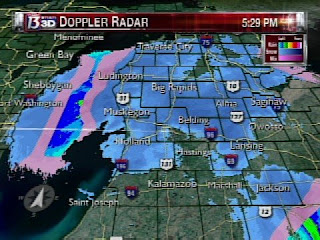 Told you it was the most boring weekend ever after the two fun filled days of Thanksgiving and Black Friday. We're under a Winter Storm Warningl. We're hoping for a snow day tomorrow, but I guess I'll just keep you posted. Noah continues to lie around on the couch, claiming his stomach hurts. I never know if he's sick or not, so I will also have to play that by ear in the morning too. Did you have a more exciting weekend than I? If you posted about it, please feel free to join Mr. Linky below.

Yay, no staples! And you think going to a museum and Playworld all in the same weekend is boring? You are an adventurous mommy!!! Way to go!

Thanks, Veronica in CA

It's never dull or boring at your house,is it?

It is nice to read that the downs, have ups ~ to keep things positive!

Glad the staples are finally out!! Good for you for getting your wrapping done! I am so not looking forward to that task. Hope Noah feels better!

OH no sorry to hear you have a sick boy.. but Yea on getting the staples out..
I did my weekend recap this week numbering the things to play along with your top 5 ;P
though I did start #1 with Thanksgiving LOL..
Glad you had nice weekend.. and way to go on the christmas wrapping. that is normally a few days before Christmas thing for me.

I wrapped presents this weekend too. All our snow melted away because of all the rain we've been having. :o(

I'm very impressed with your wrapping ahead of time. I haven't even bought any gifts yet. We've run out of places to put the gifts now that Ana was born. No more rooms with doors to hide away gifts.

I love the pictures in the post first Thanksgiving, so cute!

You were brave to venture out on black Friday.

Yay for a staple free head! And I am jealous of your Black Friday shopping!

I know from experience that the staples hurt like crazy when they are pulled out. Glad he is doing better.

I have an award for you on my blog. Come by when you get the chance.