Whew! It's Friday night again. It seems like a month since last Friday night because it has been so eventful. I guess the only reason for this post is because I want to remember pieces of it to jog the many memories we've made.

I should really back up even more but that would be out of control so I'll just go back a week.

A week ago was Friday night, December 21st. It was also my hubby's and my 16th wedding anniversary. Rather than dinner and a movie as is our custom, we stayed home with a sick child, whom we now have decided that he has had the full blown flu...poor kid. Apparently so did the majority of his class so we are just glad it happened now instead of after school starts up again. Now if he could just get rid of this nasty cough it would be a good thing.

That day was also my last day at the job I've held for two years teaching mommy and me classes at gymboree. It was bittersweet and I will keep the rest of the thoughts about that day inside for awhile longer. 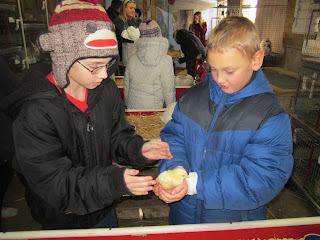 The next day was technically the first day of Christmas vacation. Since Aaron's cough was really sounding awful I remembered someone once saying that if a baby has croup to take them outside, so why not an eight year old? I found a very neat place nearby called the Critter Barn that not only had TONS of live chicks, bunnies and cats to hold, touch and play with, but also a live nativity performance and sheep shearing. Best of all, it was FREE. We went and had the best hour and a  half ever. Noah was in heaven picking up and playing with baby chicks, some of whom were only a few days old. The Nativity was interesting and I  learned a few things I didn't know about the manger itself. It was just a really really neat place to visit and I can't believe I never knew about it before now. 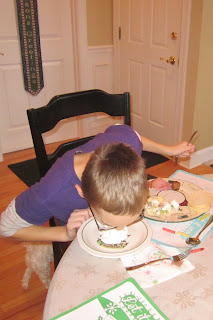 Sunday we had planned to go to the "Christmas Eve" service since our church was doing five identical services on Sunday and Monday and encouraging all of the regular attendees to come Sunday to leave space on Monday for visitors.  But sometimes even the best laid plans go awry and we decided to go on Monday night instead since we were heading to Detroit for the day for an impromptu visit with the bulk of the Wheelz Clan. Surprisingly enough, it actually ended up being a pretty good visit and the kids had a fun time playing with their cousins that they don't see as often. The boys' favorite part was eating their traditional Pile Of Cream, courtesy of my SIL.

Monday was Christmas Eve and due to (yes again) finances we had to skip our traditional dinner out after Christmas Eve services but we still had a memorable night. After church we came home and opened our Secret Santa gifts from each other and got some giggles out of the things the boys had picked out for us. I spent the day getting baking done and the boys spent time making a welcome sign for Santa. 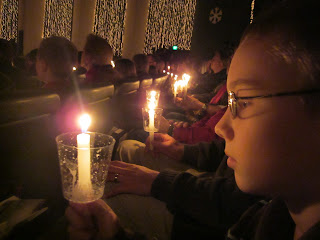 Church was amazing as always, including the first time the boys got to hold their own candles for the candlelight service.  The opening was crazy rocking and rolling a la Trans Siberian Orchestra and ended with it "snowing" in the sanctuary.

So as the boys get older it gets a little more difficult to keep the element of surprise for Christmas morning but I do believe we achieved it :) After the boys finally fell asleep and we got the presents under the tree, we got silly and decided to cover the entire doorway to the living room with wrapping paper, to keep our very curious boys from creeping in before we wake up.  It definitely achieved it's goal.  We were greeted in the morning with the boys jumping on our bed saying, "Mommy, Santa didn't just wrap our presents, he wrapped OUR ENTIRE LIVING ROOM!" It was funny when the boys were jumping through the paper until Noah decided to PUNCH through the paper and missed, hitting the wall instead. Gift opening was delayed by a tearful boy getting a band aid on a knuckle that had three less layers of skin. 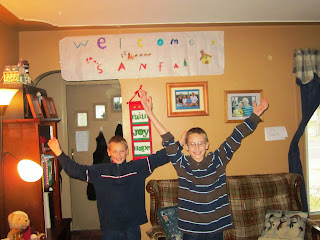 Present opening went fine and the kids liked what they got. They funniest was that when I was wrapping this year, I was determined to put things in boxes for more uniform packages. I ended up putting each of the video games that they received in cereal boxes, stuffed with newspaper. By the time Noah was opening his last gift, he said, "Oh wow, this is a cereal box so I know it's going to be a great gift!" I can't fool these kids at all and I think I am going to have to work even harder next year.

We continued our Christmas Day tradition and took the boys to Rise of the Guardians that afternoon. The boys were blown away at how crowded the movie theaters were but our movie was old so it wasn't crowded. Santa was so smart he even put movie theater style candy in the stockings. It was a very good movie. 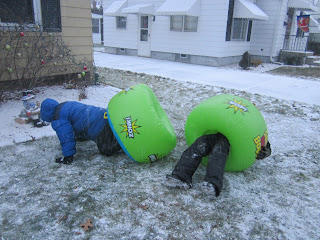 Wednesday morning was the day for playing with all the new stuff, putting stuff together and just relaxing.  And the best thing was that it FINALLY started snowing...and hasn't stopped since so we can finally go sledding at some point this weekend. The funniest present of the day was the sumo boppers we got the boys. They tried to head outside to play with them but the cold kept deflating them so it looks like they'll have to wait until spring. But while they had them, they were hilarious!

Thursday morning began our planned adventure for the week. We packed up the stuff and headed out for our road trip to a suburb of Chicago. We found a hotel nearby with an extremely low rate and checked in with about an hour to spare before our big event. I saw an IKEA and had never been to one before. We wandered the store and I think I'm glad that we don't have one of those near us or it would be hard to not spend money that I don't have there.  It was pretty cool since the colors are blue and yellow and Noah said "It's Michigan Everywhere!" 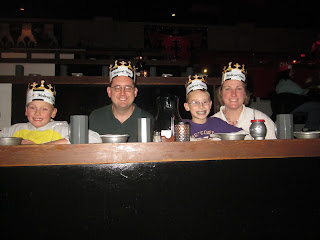 Then it was finally time! We got a really good deal on Cyber Monday and took the boys to Medieval Times. It is a dinner and tournament  where they serve you a multi course meal with NO utensils while a tournament on horses is played out in front of you. It was pretty cool and the boys LOVED it. They especially loved the battles with swords at the end. The pageantry was fun and watching Aaron attack and destroy his huge chicken slab was extremely memorable. Afterward, we returned to the hotel and let the boys swim for awhile before turning in. 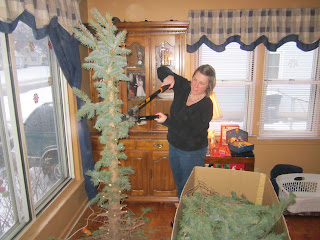 So here we are Friday again. We got up and let the boys swim again before we hit the road to come home. The drive home certainly felt much longer than yesterday. Aaron's cough is still so prominent and even though I know it's a virus that the doctor can't do anything for, it still makes me sad when I hear it and I know that he's still feeling yucky. I heard that the tree might be aggravating it though so given that, plus the fact that we got a bad tree and it was pretty much dead already, I decided to take it down while the boys were out playing in the snow. Because it was so painful, we decided to clip the branches rather than try to take it out the door so it was definitely a memorable tree un-decking this year.

One thing that Steve and I agreed on was that since we had such a fun adventure planned for a couple of days after Christmas, it took the "let down" feeling that is inevitable after Christmas away and I will definitely remember that for future years if possible.

So that was our week. Another weekend ahead and another free fun family activity planned for New Year's Eve which should be fun. Next week is off school  and work but also money-less since I am now between jobs so it will be a week at home for sure. The best thing is that after I start this new job in January, I look forward to never having to post again the words "...since we couldn't afford to...". It's been a long ten years of being poor and I am sick of it and ready for it to end.

We can make it two more weeks. I know we can. We have to. At least there's finally an end in sight...
Posted by Kristi at 7:45 PM

It does sound like a busy week. Love the idea of wrapping the door lol!