I am sitting here with a tummy that'schurning but I can;t decided if I am actually sick or not. How weird is that, huh?

It was a whirlwind weekend after a crazy busy week. By the time we tucked the boys into bed last night, I felt like it had been forever since I had seen my kids at bedtime.

This weekend was busy but it really was the end of several weeks of craziness. We had major school projects due, the start of basketball practices on two separate nights, my symphony week, which makes me gone every night until after 10:00, and, I'm sure as a reaction to the craziness, both boys were acting out in school. Very frustrating week. But the weekend was a culmination of it all. 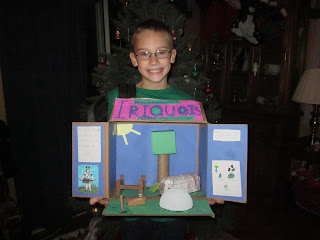 Noah handed in his diorama about the Iroquois Native Americans and Aaron started working on his diorama about the Tropical Rainforest. These alone have taken a lot of time in preparation as well as construction.  On top of that, Noah came home from school on Friday having learned to make these REALLY COOL snowflakes in art class. He continues to make a ton of them throughout the weekend. I love his artistic mind and hope I can keep finding ways to nurture it as he gets older and becomes more hormonal :) 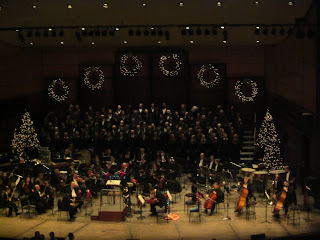 I sing with the Grand Rapids Symphony about three to four times a year. The Holiday Pops is the largest money maker for the symphony, but also the most demanding of performances, not because of the music itself, but because of the amount of TIME that is required. Rather than two performances and two rehearsals, we have two rehearsals and FIVE performances (one of which we are allowed to opt out of). Despite the very tiring schedule, I really enjoy the series, especially this year. The first night my parents came to the performance, the middle performance had my sister and her family in the audience, and the last night my in-laws brought Steve and the kids. There is something really awesome about standing on stage and knowing that people you love are in the audience SOMEWHERE. It always cracks me up on the performance that the boys come to because they jump up and down from way out in the mezzanine to make sure I can see them. 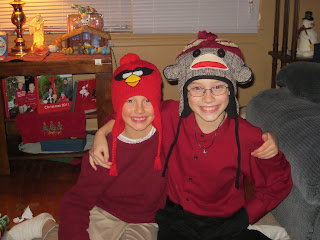 It is always an adventure when there are gatherings with the in-laws. I will not go into details about the drama. Instead I will focus on the good, which is the happiness of the kids. After the concert, we went out for dinner to Chili's, which the kids love. Then we went back to our house so the kids could open their Christmas presents from them. My MIL has finally listened to me about requests for Christmas presents and the boys were quite happy. She got them character hats that they loved, including going to bed with them on that night. I am glad that they will have warm hats IF we ever get some snow for our Michigan winter. 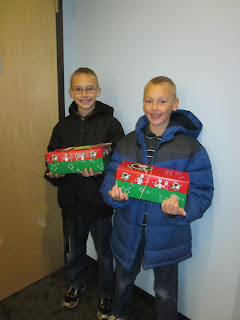 I have wanted to have the boys be more involved in giving than receiving this year and one of the ways we did this was to participate in Operation Christmas Child at church this year. The boys fill boxes with toys for a child in a poor country that the child will receive for Christmas. If you pay for the shipping online, then you actually get to follow your box and find out where and when it gets delivered. The boys had a great time filling their boxes and also writing the paper about themselves that will go to their new "friend" overseas. At least it is one way for them to start thinking outside of themselves this holiday.


1. NEW CAREER
I have applied for what feels like a million jobs during the year 2012. I have worked every night for the entire lives of my children and it has become clear that they NEED momma home at night. We knew that the only way I could ever be home at night is if I could get a decent paying full time job during the day. Our other worry had been if I get a job, what do we do with kids during the summer? The week before Thanksgiving I got a call for an interview for a teacher position. Then I heard nothing from them so I was quite sad that I was again hopeful for nothing. Then, last Thursday, I got a call asking me to come in for a second interview on Friday afternoon. After much finagling of kids schedule after school, I made plans to go for the interview. About an hour before the interview, I got a call on my voice mail saying that they were going to cancel my interview and were comfortable enough from my first interview to go ahead and HIRE ME and they would be calling Monday (today) with details. The job is on the lower paying side until I get the continuing credits to make decent money but we always knew that if we were going to ever make decent money, one of us would HAVE to go back to school. It's very exciting to know that the year 2013 will most likely be the start of a whole new life for the Wheelz Family.

The Week Ahead
This week is another doozy, but that's a given being that it is two weeks until Christmas. Luckily, Christmas shopping for the boys is done and almost everything is wrapped. It is gong to be a busy week though. Aaron's IEP review is Wednesday and he is worried that he will "graduate" since he loves his speech teacher and is sad that he won't see her anymore. We also have Aaron's Christmas concert at school and a field trip to a nursing home on Friday. Both boys have basketball practices again and we have to somehow figure out a way to finish Aaron's diorama in the next three days. (I am sooooo looking forward to being home every night so that these projects aren't such a stress anymore). Next weekend will be a wonderful one, since I will have some time to hang out with my sister and SIL at the warehouse sale, take my nephew's Flat Stanley to see Grand Rapids, and our family Christmas on Sunday.

I love Christmas. I love that there are so many more lights on or street than in past years. Now we just need some snow.

Have a good week.