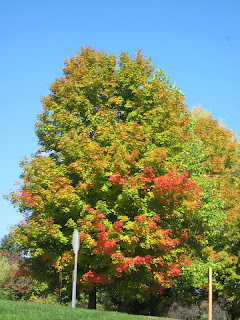 What an absolutely beautiful weekend in West Michigan. As you are about to read, I spent a good deal of time in the car this weekend and the drive both days were so incredible with the changing trees. The colors this year seem to much more vibrant than in the past few years and even the boys commented a few times on how pretty they were. I can't imagine living in a climate that didn't have changing seasons. That's one of the nicest things about Michigan...just when you get sick of the weather, it changes to another season that holds all new experiences.

So it was definitely a busy-ish weekend. Hubby was gone for some of it with his new quartet so the boys and I were on our own, which is always fun. 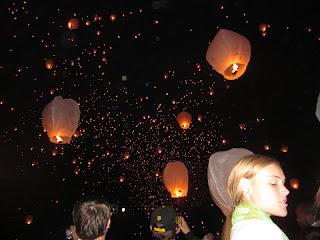 As I mentioned last week, the three week art competition that takes over our city is in full swing. One of the entries was a person who purchased 20,000 lanterns (like in the movie Tangled) to be released on cue Friday night. We headed down to face the crowds and found our spot in the grass to wait. The experience was a mixed bag. In one way, it was absolutely stunning and beautiful to see them all released from four sides of the river and see the sky FILL with lit lanterns. Absolutely breathtaking! Unfortunately, we didn't get to enjoy it as much as we could have since I had two little boys FREAKING OUT over the fire that was in close proximity on all sides of us, since people weren't waiting for lanterns to fill before releasing them and people's hair around us was getting singed. Either way you look at it, it was definitely a memorable experience. It was beautiful and terrifying at the same time.

4. Glasses Fiasco
Hubby and first born are both spectacle wearers and that does cause a bit of stress once in awhile. Hubby sat on and broke his glasses Friday and came home to find that his "spare" broken set are also missing since Noah had been trying to use them when HIS glasses were lost. So take a family with a checking account balance of less than five dollars and try to buy new glasses for the head of household and that was our dilemma Saturday morning. For now, the glasses are Jerry rigged and we will go without buying food this week so daddy can get them fixed. At least one more week of mac and cheese and hot dogs for dinner every night for the Wheelz Home. 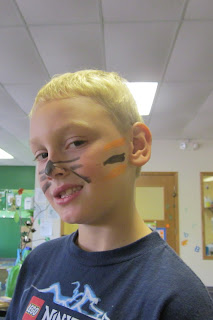 3. Road Trip One
Saturday afternoon my sister held a grand opening of the preschool she has been working so hard to create for a very long time. The facility is very nice and I took the boys over to the center for awhile. The boys were all excited to do face painting and then disappear to grandpa and grandma's house with their cousins.  It was a beautiful drive north and home. I am so lucky to have so much family close and part of the boys (and mine) lives. 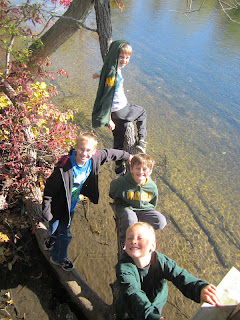 The campus ministry in which Hubby and I were involved held a reunion on Saturday but given the other conflicts, I was unable to go but still had wanted to spend time with a friend of mine from college who was in town for the reunion. Her two boys are the same age as my two boys so we drive down to Kalamazoo to spend some time with them Sunday morning/afternoon. It was a wonderful visit. We took the boys out to a local nature center and hiked on a couple of trails, including finding the place that Hubby and I spent MANY weekends together while we were in college. Afterward, we took the boys to Steak and Shake and they had more fun playing with cardboard cars than I ever believed possible. It was just such a good visit and all three of us are anxious to have another visit with them before another three years passes. 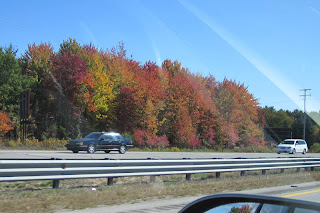 After meeting with my friend (she had a six hour drive ahead of her back to Wisconsin) I drove down to my aunt and uncle's house in which I lived for a couple of years in college. We had a really nice visit for a couple of hours and we took care of some business left over from my grandma. I came home with another box of piano music from my grandma that I am looking forward to sifting through and a few other things that will make life a little better for a little while. The rest was just talking more about grandma and her final days. Another part of this that came from this weekend was scheduling a final day for my two siblings and I to get together in a few weeks and go through the remaining things from grandma's apartment to see what we would like to keep as heirlooms to pass on to our kids and grandkids.

The Week Ahead:
I have two mornings off from work this week in which to take care of some needed business in several areas of my life and get my house in order.  I have a lot of things on the list and I am so thankful to have some time without kids to try to cover as much as possible tomorrow. I am also hoping to make it downtown for one more visit to try to see more of the art I've missed. I keep hearing of more and more things that I've missed in the two times I've been down, probably because I had kids in tow.

All in all, a beautiful fall weekend in Michigan. Have a good week!
Posted by Kristi at 6:22 PM

Glad you had a good weekend! Funny about the lanterns, because I just watched that movie with weekend with a 7 yr old girl!