It was a cool weekend finally for the start of Autumn. We are fighting the urge to turn on the furnace and so far so good.

It was an okay weekend for the most part.  The weather was actually an interesting part of the weekend since it was so weird. It was bright blue skies and sunny at the exact same time as dark gray rain clouds, depending on which direction you were looking. We never knew when it was going to start raining or be sunny and hot, and it changed in the matter of seconds. Kind of spooky but cool at the same time :)

5. Gymboree Kids Day
I had to work an event Saturday morning that we do each year at my day job. We held a "Kids Day" to try to bring in more awareness of our classes and play facility. It was huge and we had over 200 kids in and out within the two and a half hour event. I was done by 1:00 and was even more happy to hear that the three "boys" (Daddy and boys) had gotten along fine while I was gone (which hasn't been the case much lately).

4. Football and a Bit of Maturity 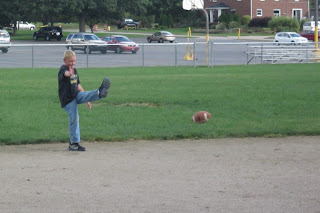 I missed the deadline to be able to sign Aaron up for flag football this year but that hasn't stopped the interest. He has been trying so hard to kick and catch our football lately so when I got home, we headed over to a local park to play. It was a really fun time. I was proud of Aaron because not only is he trying very hard to kick the ball, he is trying very hard to catch them, even when they are super high and coming at him at pretty fast speeds. As a matter of fact, he got NAILED in the cheek while trying to catch one and after a small amount of whimpering, he got right back up and tried again, which is a HUGE improvement that we have seen in him since school started this year. Up until now, he has always just given up when things got discouraging. But since school started this year, Aaron seems to be more brave in giving things a second try. I am not sure why, but I know how much Noah improved in effort and positive attitude when he was in third grade with this teacher and I am wondering if that is the same thing with Aaron.  Whatever the reason, it is a fun change to watch in him.

3. Church
Noah was completely bummed that it wasn't his turn to run the soundboard at church this morning and then after church he said, "Mom, nobody ran the board today" so I encouraged him to ask next time if there is no one there and he was so excited at the idea that he could show some initiative on his own and is excited to ask next time. Aaron attended grown up church with us this week and did really well. Not sure which he will go to next week. 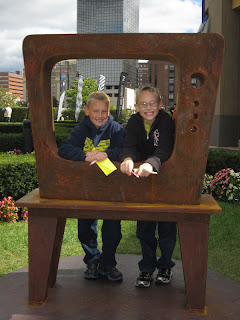 Grand Rapids has an annual event that completely takes over the city for about three weeks each Fall. Over 1500 works of art, both huge and small, of all various types are installed all over the city. So I took the boys downtown for a small viewing Sunday afternoon while Hubby was gone for a rehearsal. The weather kind of shortened things but we did see a few fun things that stood out. ArtPrize really is such a good thing for our city and I love just walking around downtown and being part of it. Both boys brought a small sketchpad to draw things they saw, which they do each time we go.

1. Sunday Night Stresses
School has been in session for a few weeks now and we are still trying to figure out the school routines and the changes it creates in family dynamics. Sunday night was a bit of a stress trying to figure out the week ahead and Noah had a rough time settling in for the week ahead. It was a first peek at the social stresses that we may be facing this year, which I was wondering when they would start. We'll keep working with him to help him the best we can and we also need to work better at hiding our own grown-up conflicts because I think it just exacerbates a difficult situation for him.

The Week Ahead:
We'll get through the week ahead, one day at a time, just like we work our way through every other week. I look forward to the day when we are actually "living" rather than "surviving" each day. There will be one fun day (hopefully) on Thursday when I go to the field trip with the classes to go see ArtPrize again.  Hopefully other happy moments will show their face as the week progresses as well. That would be a really nice thing.