Yes, oldest is turning ten in a few months and seems that we are SLAMMING into our pre-teens with him. I have a feeling that although some of these traits are part of most pre-teens, I am thinking others may be distinctly "boy" issues.

For example....what is it about hygiene that becomes non-existent all of a sudden. As I was doing laundry a couple of weeks ago, I was sorting out my hot water items first. You know...undergarments. Because of my schedule, I generally only get to the laundry on weekends and then spend every Saturday and Sunday doing a marathon. By that point, everybody in the house is out of undergarments. So I usually 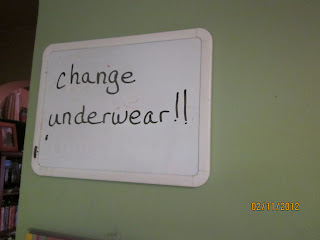 expect at least two (sometimes three if there are a lot of towels) loads of this type. But I was sorting and found that the entire "hot" pile fit into ONE load. Hmmmmmmmmm..... Upon further inspection, there was an obvious size missing in the pile. There was NOT ONE pair of size medium fruit of the looms in the mix. NOT ONE! A certain nine year old has been wearing the same tighty whities for a week! So after questioning, he does admit to this, but is not even phased by the disgust factor in this. Now, I am not home at night during bedtime procedures, so a new plan was devised to try to remind ALL THREE males in the house that underwear really should be changed EVERY DAY and the eldest male may need to help remind his sons of this fact.

I wish I could say that is the only hygiene issue in the Wheelz Family. But, as I stated before, the boy:girl ration is quite uneven. 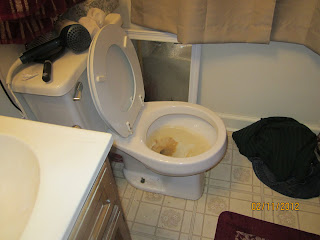 y in the world do boys have such a difficult time with the idea that after you go to the bathroom, you PUT THE SEAT DOWN! Nobody wants to go into the bathroom and be treated to someone else's remnants. I even tried to give an allowance JUST for putting the toilet seat down. I tried to tie a weekly monetary reward to the procedure of putting it down, in order to train them, and the boys actually failed to earn the reward for two weeks in a row. Okay moms of boys...suggestions?

Oh, and while we're lingering on bathroom issues....washing hands. Running hands under water is RINSING, using SOAP is WASHING. And you gotta love walking into the bathroom while child is "washing his hands" to find that he is standing there with the water running so that mom thinks he's washing his hands, but he's not really doing it. And this is the same kid whose cuticles are bitten to shreds and hasn't had fingernails in four years due to all of the biting. He's almost ten and his fingers are ALWAYS in his mouth. How gross is that?

And hygiene is not the only issue. The other morning, strictly as an experiment, I decided to NOT nag the boys about getting ready for school. When I was in fourth grade, my mom worked nights and my siblings were gone by the time my alarm went off in the morning. So, at nine years old, I was waking up alone to the alarm, getting myself fed, dressed, lunch made and out the door to the school bus on time with no one else in the house at the time.

Now, I have severe issues with my past in regards to that issue, but the point to me is, if I could do ALL of that at his age, why is it that MY nine year old can say without any hesitation, "Mom, why didn't you tell me to get dressed when it is already 7:20?" Ummmm...Honey...if you are clearly able to tell time and KNOW that you need to be ready, then why not JUST DO IT!!! I am seriously thinking about actually staying in bed some morning and setting an alarm just to see if he can manage to get himself out the door in time some morning.

Now, I don't mean to say that this child is bad. He's really not. But it seems to me that if we don't get a handle on a few things around here, the teenage years are going to be VERY rough in the Wheelz Home.

And we might as well get a start on little brother as well, who will be bringing up the rear before we know it.

I know I am probably to blame for some of this. But as I am not home with the kids at night, I have NO control over their hygiene in the afternoons and evenings, as well as no control while they're at school. How the heck are these kids supposed to learn anything when I am NEVER home to help them? As not working nights is not an option, I am apparently in for many years of boys becoming more and more disgusting and mom having less and less influence.

It's a good thing they're cute. That just MAY be their saving grace.
Posted by Kristi at 5:28 AM

I'm not sure if the underwear thing is just boys - we've had the same issue with Abbi on and off too. Maybe it's the age?

With Becca, I have to specifically tell her to wash her hands "with water" because otherwise she'll go in there and just wipe them off on the towel and think she's all good. Sigh.

Abbi and Hannah do get themselves totally ready in the morning, but in Abbi's case it's prompted mostly by the fact that she wants to watch Martha Speaks before the bus comes and I won't turn on the tv until both of them are completely ready to walk out the door. That's been a good incentive and they know that as soon as it's ending, they need to be heading out to the bus stop, so it helps them tell time without having to remember to watch the clock.