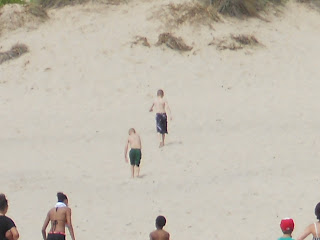 One reason we are lucky for living where we do in Michigan is our close proximity to Lake Michigan. In less than an hour's drive, we can get to the "Big Lake" to play whenever the fancy strikes us. In the past couple of years, we have frequented the beach in Grand Haven, particularly because it had the scenery of the lighthouse and because it contained fond memories of our college years. But it was missing the one element that I remember so well from my childhood...sand dunes. So a couple of weeks ago, we decided to drive a little further north and try out the other nearby state park beach, complete with sand dunes.

We are loving it! 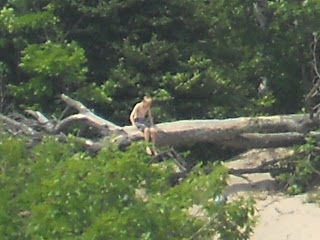 o much fun that we returned again this past Sunday, this time with my sister and her three kids. After lots of swimming in the bigg-ish waves, the four boys set off to explore the dunes. With varying degrees of success in the "stay together" instruction, they had a great time. They found a couple of tepee type structures in which to play "warriors" and also a big branch that extended over a two foot or so drop. I remember climbing on sand dunes when I was a little girl and I am happy that the boys are going to makes these memories as well.

After several rounds of back and forth between lake and dunes, we decided it was time to head home. As we were leaving, my sister and I started noticing "battle wounds" on the happy little boys' bodies from branches, but I chocked it up to "boys will be boys" and after a good shower and antibiotic cream on the scratches, my boys are already asking if we'll be back this week for a third Sunday in a row.

I may not be able to provide a big summer vacation for my boys. But I know that this memory will be one that will last, as it has for me for well over 30 years.

So, in response to the boys' plea if we're going back this week...given the forecast of highs in the 90's and humid, muggy air, I'd say that the chances are good :)
Posted by Kristi at 6:08 PM