Memorial Weekend was several weeks ago now but I never posted on it and I wanted to have a record for the future. As silly as it seems, I find myself often looking back through this blog to find out what we did at different times through the years and I like having the record to refer to.

My birthday always falls right around the holiday weekend and it fell exactly on Memorial Day this year, which meant we had the whole day together as a family. Not that we did anything much, but that really didn't matter. Any day that the four of us have to just be together feels like a holiday, and to have temps in the mid 80's just added to the fun.

About a week before my birthday the birt 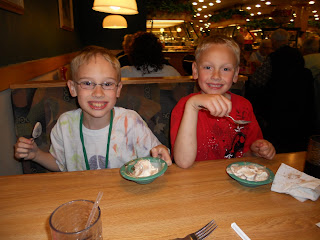 hday emails started pouring in for restaurant freebies, which we took full advantage during the holiday weekend. The funniest was Old Country Buffet. Because that restaurant has gotten quite expensive (or maybe it always was and we just didn't pinch pennies enough way back when), we had not been since Noah was in baby food. But when the coupon for a free dinner came in, we decided that it was time to go. The boys were HILARIOUS! They had never been to a buffet of any kind before and their heads were spinning from the time we walked in. They could not believe that they could actually take anything they saw to eat. Especially when it came time for dessert! They are still talking about the buffet :) 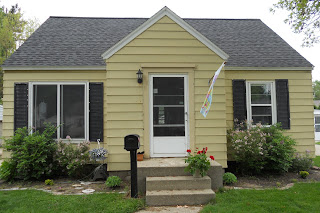 y parents came for our traditional birthday breakfast at Arnie's, followed by a birthday trip to the flower store. These trips are the reason that I have any landscaping in our yard whatsoever. I spent some time that afternoon planting and loved the look. Unfortunately in the two weeks since, several big wind storms have come through and the look hasn't survived as well as I would have liked :( 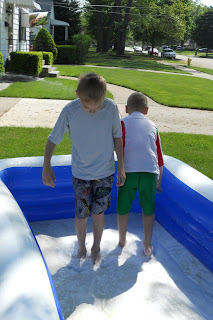 nny and warm from the beginning and Aaron, our water obsessed boy begged to set up the little pool we had last year. I had remembered that it was popped on the bottom ring but figured the other two would at least bring a little entertainment. Steve was not so thrilled when he took it out of the garage to find it was filthy and need to be cleaned. When I mentioned to Aaron that we couldn't have it going unless they helped clean it, they hemmed and hawed at first, but when I told them to don their bathing suits and gave them sponges for their feet, they went to work without too much delay. Using a ton of dish soap made suds at least a few inches deep and they boys had just as much fun with the soap as they did later with the actual pool.

It is amazing how boys don't not 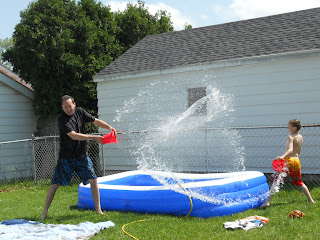 ice FREEZING cold water as long as they can play and be crazy in it. Which they did all afternoon. Aaron even devised a Wipeout (based on the TV show) course complete with Steve throwing balls and other obstacles at them while they ran through into the pool. Silly boy!

Later that afternoon, we broke into th 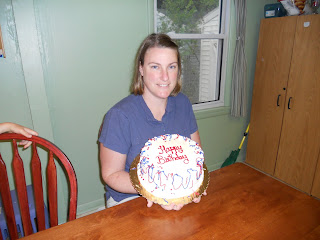 e yummy birthday cake that my parents had gotten me from Arnie's on Saturday. It was yummy but huge so we took it over to the neighbor's to share and we had a nice time vi sting while indulging.

It was a nice holiday weekend. Now that school is out, we are settling into a summer routine.

And looking ahead to the next holiday weekend...Fourth Of July which is also a birthday for a member of the Wheelz Home.
Posted by Kristi at 6:49 PM

I'm glad you took time to record it. I also like to write everything down to remember later, and I often go back and read old posts. So glad I have that journal of my kids' lives.