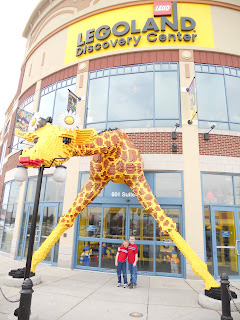 So yesterday I posted about all of the adventures leading up to out main point of going to Chicago for Spring Break, but never got to the main event.

Back in December on Christmas vacation was when Steve and I had realized that we hadn't gone anywhere as a family during the entire year and that no matter what we had to do something for Spring Break. Because of finances, we were of course limited so we figured a trip to Legoland Discovery Center in Chicago would be fun since we'd never been there and legos had been a big request that year. I had talked to my SIL since she had been there and she said it was a fun place. And then, a short time before we went, I found out that my sister was also planning to take my two nephews there the same week as well. Since my other nephew wasn't on spring break but had a half day on that Wednesday, plans were made and we all decided to meet at Legoland and have fun together. We were laughing because it all just happened to come together rather than a big planning session, which is probably why it all worked out so well. I got a lot of great pictures of groups of cousins that I can't share here, but they were awesome. I even posted a couple of them on the Legoland site :)

The first section was Miniland, w 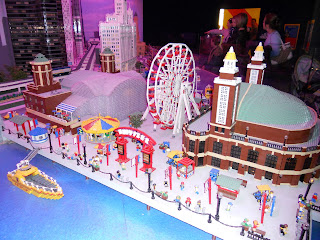 hich was a huge rendition of the entire Chicago lakeshore. It was so detailed. Noah thought it was pretty cool on one end where they could actually touch controls and move some of the pieces in a construction area. It was also neat because every five minutes or so, the lights went out and it turned into "night".

Moving on, we went thr 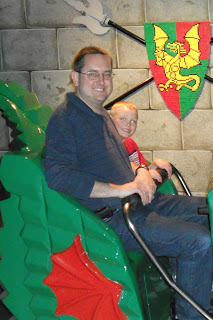 ough a path and then landed at Dragon Quest, a little ride similar to the Winne the Pooh ride at Disney World where you rode around in a little car and saw the different lego creations in a cave like setting. The kids really enjoyed this ride and at the end of the day went through over and over again, mixing up the combinations of which kids rode in groups of four. Unfortunately we let them ride one time too many and had some drama, but it was short lived and not something we're not going to dwell on.

After the ride we headed 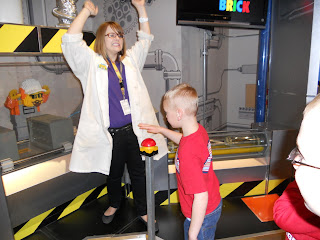 upstairs to lego mania. We headed to the "factory" . It was a model of the factory where legos were made. The lady who described the process was very silly and the boys loved her. Each of the kids got a chance to push a big red button making one of the processes begin. Did you know that yellow legos were the first ones made? Anyway, the only disappointment here was that we thought that the kids were going to receive a lego souvenir from the factory since I had read it somewhere and they didn't, which made Noah sad for about a millisecond.

After the factory, we finally 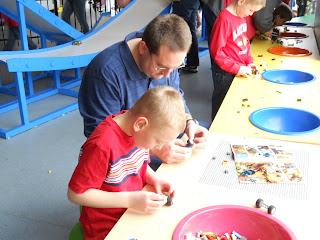 met up with my sister in the main building area. There were several areas where kids could build vehicles of different sorts and try to run them down two different test tracks. All of the kids took their turns at making cars and trying to run them. It was a challenge to find wheels to use but I don't think anyone was sad from it. I was actually impressed that Aaron sat down to make a car, since he is usually a little less interested in following through on things like that.

Right near there was the 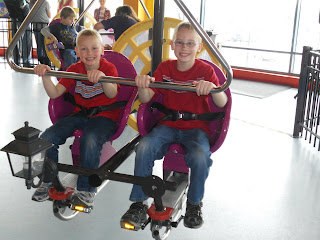 other ride. It was a simple kiddie ride with planes that flew around in a circle. Aaron rode it over and over again, again with different groupings of people each time. He even rode it once with Daddy, which was very cute. I think we went on a good day since they never had to wait for too long before it was their turn to ride and I think all of the kids were able to ride it as many times as they wanted.

We then headed to th 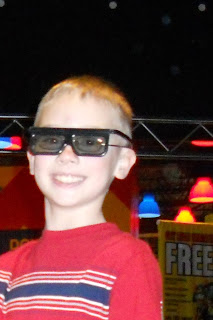 e 4D movie. I got an adorable picture of the cousins with their 3D glasses on. The movie was about 20 minutes and the kids loved it. I think they would have stayed and watched it again if we'd let them. It was funny watching Aaron because every time something came at us, he held out his hands as if to block it. So cute.

At the end of our adventure, i 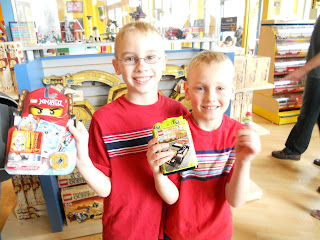 t was finally time to stop in the gift shop and spend the souvenir money that Grandma had given them. Noah was so excited to finally get a Ninjago set and Aaron built his own lego clown guy and got a little car to race him around in. I know this was a good trip because it was the first time that we visited anywhere that Noah didn't spend the entire time we were there asking when we would go to the gift shop.

On our way ou 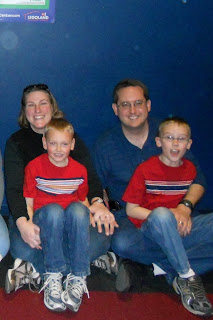 t, we decided to go back to my SIL's for dinner before heading out for home. The kids had a good time just relaxing and eating yummy pasta and chicken cacciatore. Finally after ice cream sundaes, it was time to say goodbye to our 36 hour adventure away. As we headed out to the car for the three hour drive home, we snuggled the boys into their seats under their blankets with their buddies and looked up. The sunset was beautiful, bringing a nice close to a memorable family day.

I keep seeing all of the status updates of all of the in laws and their annual exotic trips to warm places for their wonderful spring break adventures. Yes, that would be nice someday to take a real vacation again like everyone else. But for now, I can remember that we gave the boys a fun day away at someplace new and they will have memories of us being together, whether we travel three hours away or thirteen.
Posted by Kristi at 5:49 AM

That truly sounds like the best trip ever for a kid. Hotel, swimming, favorite food and Legos with cousins!

We never went anywhere exotic when I was little. We would rent a beach house every now and then with all the aunts and uncles and spend a week at the beach - I have such fond memories of summertime with my cousins. But the same experience could have been accomplished on a camping trip or a hike in the mountains or just a weekend at grandma's. It is the capacity for fun that makes a good memory.