How We Got Them A Hoop

Noah asked the other day if he could have a basketball for his birthday. I told him that it would be silly to have one since we don't have a hoop. He said he wanted one so he could play with it at recess. We have been debating the best way to get the boys a basketball hoop for ages, including going round and round about where we would put it if we got one. Between the cost of between $150 and $200, it just wasn't going to happen any time soon.

But when I was going through the things we were going to put into their Easter baskets last week, I 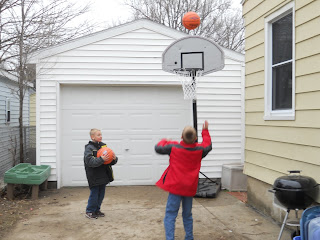 decided to use the refund I got at Toys R Us for a recalled product we had to get them a basketball to share at school. Since they have separate recess times and their lockers are pretty much right by each other, I figured it would work out fine.

So I went and got the ball and wrapped it up and hid it downstairs.

Then came Friday night when I had a huge epiphany. Why not check Craig's List for someone who no longer used their hoop. I found a couple of ads but nothing that seemed like it work. So I decided to post a wanted ite 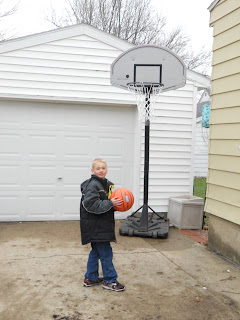 m post of my own. In less than an hour, I got a response from someone who lives about 40 minutes away willing to give us theirs for $25. I immediately called Steve at work to see if he could get his work truck to pick it up and we could surprise the boys Easter morning.

He called me back soon after telling me that when he was asking his co worker about borrowing the truck, the co-worked responded saying that we could have their old hoop for free as long as we wanted to come pick it up.

So Steve showed up at home Saturday morning after work with his work truck and a "new" basketball hoop. The boys were so excited but distressed that the net looked so awful (it was ripped, nasty, and hanging there by a string). They also were bummed that we didn't have a basketball. Apparently, none of the other 20 balls in our garage would cut it. So I packed them up and headed them to Target for a ne 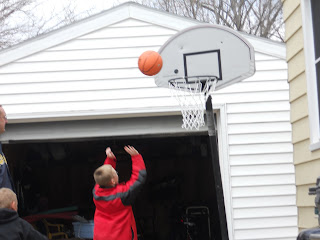 And the inevitable question came..."Mom, don't you think we need a ball?"

So I got one ball and they were both incredibly puzzled as to why we were only getting one ball. I wasn't sure if I should tell them that there was already another ball in the basement wrapped in pretty Easter wrapping paper.

But, soon after we got home, it became clear that Easter was going to come a day early and I brought out basketball number two for them.

The rim has one broken hook...but hubby the "cable guy" solved that p 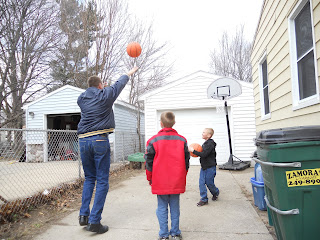 roblem very quickly with a cable tie. The dilemma then arose about location for the hoop. We have a very narrow driveway on a busy street very close to the neighbor's fenced in yard that is covered in dog poop from their three dogs. The hoop moved several times before finding a place that might work for awhile.

The day was spent playing ball off and on all day. MANY balls passed over the fence and needed to be retrieved. Another issue arose when the the balls strayed into our own backyard, that has temporary fencing up to keep Lily in. So in order to play, we have to keep the garage door down, but each time the ball strays into our back 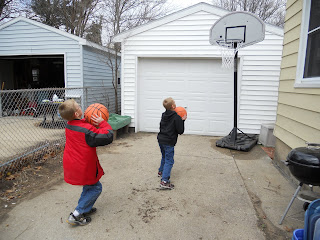 yard, Noah has to lift the garage door for retrieval. Not the most ideal situation, but the benefits definitely outweigh the obstacles.

The last four days have been rainy yucky outside, but each time there has been a clearing, one or both of the boys have been out the door to play ball.

This was an awesome little blessing that came our way and we certainly couldn't beat the price! 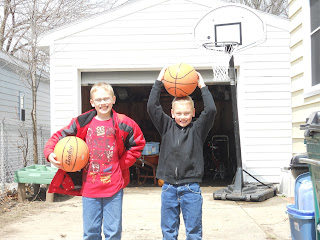