Yes, it's Tuesday and the Weekend was over more than 24 hours ago. But hopefully at this time next week my employment registration will have gone through and Tuesdays will be my only day off so it is more than likely that Weekend Reports will come on Tuesday from here on.

It was a very COLD weekend here in Western Michigan. The boys were so excited that they had to have indoor recess on Friday because of sub-zero wind chills. I had hoped to take them ice skating on Saturday but it was so cold that I changed my mind. This IS what we ended up doing.

5. Daddy On A Mission
Saturday morning after Steve got home from work he headed right out again with the van. Our brakes had been metal on metal for weeks because the pads and rotors were completely run down. Steve found a guy at work that said he would do the labor for us if we got the parts. But we still couldn't find the money for the parts. Well, last weekend when we were pulling up the carpet, I began my wife nagging about not wanting the carpet to sit in the driveway for six months so to appease me, Steve was willing to put the carpet in the truck and take it to work to dump. WHILE he was cleaning out his truck, lo and behold, he found brand new unopened brake pads that he bought WHO KNOWS WHEN for the van. So we figured it was a sign and instead of paying a bill that was long overdue, he got the rotors for the van and spent ALL DAY on Saturday at his friends' doing the work. So there will be no trash collection this morning, but I will be safe driving four kids home from school everyday.

4. Scout Home Work
Those of you who have boy (or cub) scouts will relate to this. Cub Scouts is WORK. It's not just going to meetings and having fun with friends. With the boys, you have a book of achievem 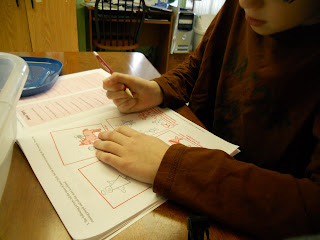 ents that have to be met. And in order. We love this new pack, but joining in the middle of the year has put us at a small disadvantage. We found out rather quickly that the old pack was supposed to be handing out achievements a lot more readily than they were and that the boys were a little behind. One of the tenants of scouts is religion. And there is a God And Me program that all scouts should get at some point in their scouting experience, be it cubs or boys. We found out that the "ceremony" for this year's program is going to be the first Saturday on February. Noah really needed to get this before he moves into the new level next year so we had to get going on it. It is a booklet in four sections, with lots of hands on work, bible stories and at the end of each section, Noah is expected to make a game for his gamebox. We spent Friday afternoon, most of the day Saturday, and a little bit on Sunday night working on his program. It was actually really fun and I think both of us learned a few things. I was amazed at some of Noah's insightful answers to some of the questions and actually surprised at how much he already knew. 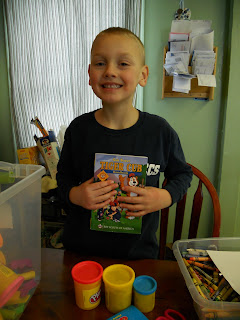 other had some problems with jealousy during this. It always amazes me that BOTH boys sometimes complain when I am working with them on homework. But at the same time, whenever I am working with one of the them, the other one ALWAYS is by my side trying to get my attention on something else. And that was indeed the case with Aaron, especially since Steve was gone with the car. So I went and got HIS scout book to see of there were any achievements we could knock off while Noah and I were working. We found one about primary and secondary colors. He was supposed to do some kind of experiment to make secondary colors. I pulled out the playdough and got out red, yellow, and blue. I had him make predictions of the new colors and gave him two colors at a time to mix. Neither he NOR Noah thought that they would blend completely. It was not only really good for Aaron's fine motor skills which are still a little delayed, but also it was fun listening to him exclaim each time a new color emerged.

3. Saturday playing
Even though it was freezing (literally) outside, we did bundle up and get out for a short time. I started clearing our driveway when Noah begged for a slide. So we piled up snow on the front steps and crated a slide for them to sled down. It was small, but very much appreciated and the boys had fun. Then we ventured into the back yard and I brought Lily out to romp in the snow. It was way over her head but she had so much fun and was so cute. Even though she was shivering, she didn't want to come in. But I think a six pound short haired dog should only endure so much before her little body can't handle any more. Maybe we'll do more again soon. Noah kept telling em to take pictures but I was having fun and decided that we would just experience the fun this time.

3. Game Night
Related to Noah's God and Me work, we used Saturday night game night to play the games that Noah had made so far. There was a memory game that he made of twelve things that God created. Some of the pictures he drew were so cute. I think I will do a post about this program after his final event in February. The other game was kind of a guessing game based on the characters of the Christmas story. We altered it and turned it into a game of Charades. We were ALL cracking up when I gave Steve the characters such as "camel", "sheep", and "shepherd". Props were flying and we all had a good laugh.

2. Sunday Church
Have I mentioned how happy we ware at this new church? Well, I'm going to again. As much as I didn't want to get up when the weather person declared a -16 wind chill out, we did it anyway. The service was all about Cultivating Joy and it was a good message when we are finding ourselves so frustrated about finances. I am hoping to start subbing next week but the month of January made every single thing fall back behind and even when we did taxes discovered that our refund will not even make a dent in it all. So when we had a message about Cultivating Joy in the stress of our lives, it spoke to me. That is what I am focusing on this week.

1. Visit to my Parents
My parents are leaving to go down south soon and I wanted to make sure we got a visit in before they left. Usually we would have packed winter clothes and sleds, but with the it being SO bitter out, we opted against it this time. My step mom surprised me with a trip to Younkers for a few teaching outfits since I only owned "mommy clothes" and it was not only nice to get a few things that made me feel pretty, but just being out shopping together brought me a lot of joy. I keep smiling thinking about it.

Monday and Subbing registration
So Monday morning I had an enrollment meeting for subbing and it was a test run of sorts as to how things will go when I am working every morning. It wasn't terrible but it is clear that we need to work on procedures a little bit. The funny thing was that I ran into a teacher that I taught with seven years ago at my last full time teaching job. She is just getting back into it again too and it was fun to be the only certified (expired) teachers in the room. It gave me some reassurance that I am definitely ready for this. Now I am just frustrated that I have to wait another week or two until I'm in the system. It's killing me that I didn't do this before. We could avoided all of this nightmare and been secure a long time ago if I had just done this earlier. This waiting two more weeks is causing stress in the marriage as well as the household. I just want to start NOW.

So that was our weekend. Time to go clean the house. Have a good day.
Posted by Kristi at 4:25 AM