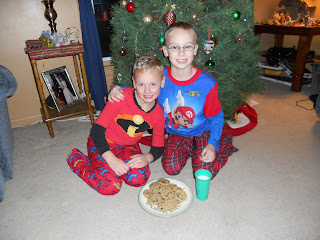 Here we are, Monday hangover from Christmas. Not in the drink sense, but in the merriment sense. Looking back on the weekend, it was pretty good. I am just sitting here, looking at the tree that I really don't want to take down, listening to the boys playing with their toys in separate rooms, and wondering if we're ever going to get enough snow to go sledding before break is over.

There were a few highlights from the weekend.
Christmas Eve
Since we had just had a painful parting from our old church right before Christmas last year, we actually didn't go to church last year. So this year was kind of exciting to go to the CE service at our new church. It definitely didn't disappoint. The kids sat with us during the service and the entire "auditorium" was packed. It started out with more contemporary versions of traditional carols and it was neat to watch and hear Aaron sing out strong. As the service went on, there was more music, a drama skit, two small messages, and my favorite part...as a man came out to sing "O Holy Night" Noah leaned over to me with a smile and said, "I LOVE this song!". As the song was nearing the end, the congregation was invited to stand and as we started singing, SNOW started to fall from the ceiling. Steve and I are still not sure what the "snow" was made of but I think it was actually a snow machine because you could hear the blowers above us. It was really a neat additon and the kids loved it.

After church we went out for dinner. Christmas Eve is the only night of the year that we justify taking the four of us out for a full restaurant dinner out. It had its ups and downs, but the leftovers were helpful Christmas night (keep reading)

We came home to open ou 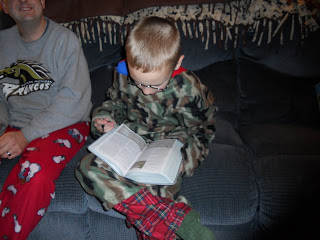 r traditional Christmas Eve gifts where the boys got snuggies this year instead of pajamas and I presented Noah with his very own engraved Bible. He was pretty excited about it and I hope it will become something he will treasure in years to come.

By 7: 15 the boys were actually begging to go to bed so that Santa could come so we obliged.

Christmas morning didn't start as early as I'm hearing that others' did. The boys were told to wait until 7 to come up, which they did. We started with stockings as always. The big deal from the 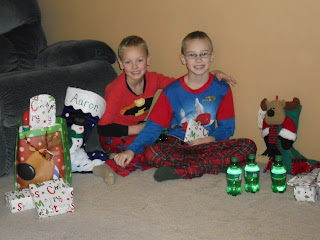 stockings by far were the mighty beans that Noah wanted. I still don't see why they're such a big deal, but it was one of the things he begged for the most and Santa did his best to oblige.

When stockings were done, we took a break from the action for some breakfast before opening presents from us. The big presents for the day (aside from the mighty beans) were...

Remote Control Helicopter
By the end of the day, rules had been 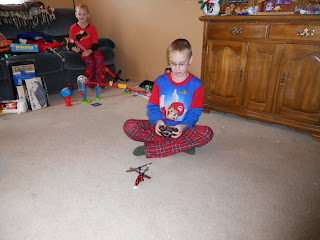 established about how it would be played with and Noah became very good at making it hover. The rest of us were clueless. It made so many crash landings everywhere that we were convinced that the toy wouldn't last the day. Three days later, it is still functional. Quite a hardy little toy. It's not often that we're pleasantly surprised but the quality of toy, rather than the other way around.

Aaron's Keyboard
This story is awesome! We were trying to 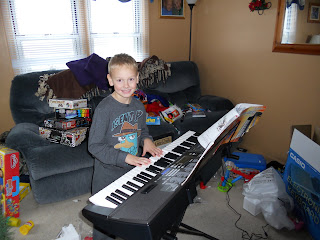 figure out a fun way to present it to the boys. Steve wanted to do a scavenger hunt. So as were were setting presents out, he hid the HUGE box in the closet. Then he went to the computer and authored a poem to hide in the tree. We weren't sure how we were actually going to "find" the note, but that seemed to fix itself when about 3 O'clock Christmas afternoon I sent Aaron to his room to find something and we heard a shout for his room, "MOM, THERE'S A HUGE PRESENT IN MY CLOSET!!!" Steve and I ran for the video camera and camera while Aaron dragged the very heavy box all the way out of his room into the living room to open it. He was SO excited! After opening it, he proceeded to play the few little songs he knows and play around with all of the settings. It remains on its stand in the living room for now.

Legos legos everywhere
It seems to be a theme among 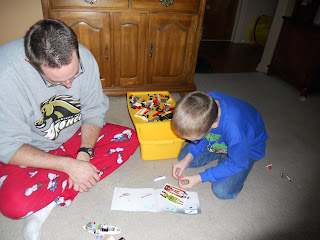 all of my FB friends with sons. Legos all across the board. Noah got several sets, but really what he loves most are the Lego figures. He was so excited about getting so many of those and played with them off and one throughout the day. It also included two of those Lego build it games which turned into Lego playsets instead but I figure if we had bought the playsets they would have been just as expensive anyway so I am pleased that he is enjoying them anyway. He also got a book with all of the Lego figurines which he enjoyed

Pogo Boy
The only downside to Chris 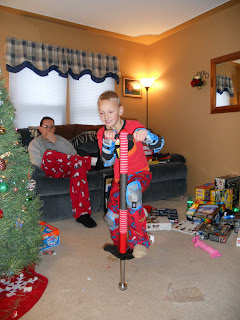 tmas in Michigan is when you get outside toys, it is too cold to play with them right away. But it didn't stop Aaron from loving his pogo stick. He spent the entire day alternating between the pogo and the keyboard, and has every day since as well. It will be interesting to see if he can get the hang of it outside. He also received pads for elbows, knees, and wrists for while he's learning.

Dinner Failure
I swore I wouldn't post this, but I'm doing j 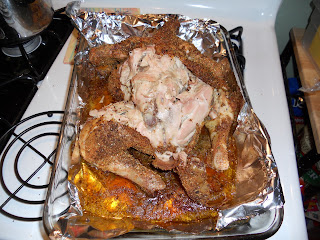 ust for Steve. I had planned to make my first "bird" for Christmas this year. I don't like turkey and the boys don't like ham do I thought I would make a chicken. apparently, I didn't prepare myself enough ahead of time and long story short, my bird was failure. So with all of our sides prepared, Aaron ate leftovers from dinner the night bore with his sides, Noah ate hot dogs with his sides, and Steve and I filled up on side dishes. Next year I'll get it right...I hope.

The rest of the weekend was spent at home, playing with toys. As I sit here Monday evening. my throat hu 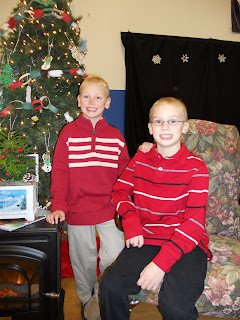 rts due to working last nignd (I am always sick the day after working all night) Noah is lying on the couch with a tummy ache and fever, having thrown up in the car on the way to the toy store a few hours ago. I am desperately searching for day jobs and praying I don't have to go back to Kohls' Wednesday night. There is yet another "squabble" with the Wheelz in-laws due to not sending out Christmas cards so I'm sure we'll have to deal with that sometime this week as well.

I am enjoying looking at every one's Christmas pictures. It is cracking me up how similar other peoples' stories about their boys are so similar to my own. Have a wonderful week heading into the New Year. 20101 was full of lots of changes for us so I can only imagine what 2011 will bring.
Posted by Kristi at 12:46 PM

Shane watched over my shoulder as I scrolled thru your post-- he was pleased that your boys got good gifts, but is now a bit miffed that he didn't get a keyboard also... geez. Ah, well--on to the New Year,and new perspectives?