Making His Own Fun

You know the summer is wrapping up when every day by 1:00 in the afternoon I am getting begged for DS time. I generally try to keep the rule that TV goes off at 10:00 AM and doesn't go back on until after 4:00. I know that it seems like that still leaves a lot of TV time still, but at least it's not in the bulk of the day. That also doesn't account for days that are terribly humid and miserable, or raining.

But on a beautiful sunny summer day, which most of them are, the boys know that the no technology rule stands. I try to live by it for the most part too, but not quite as successful, I must admit.

When I was little, I remember turning off the TV in the morning after Price is Right and then being expected to be outside until dinner at 5:00. I also VERY RARELY remember my mother ever actually doing anything to amuse. I was expected to find things to do, either with neighborhood kids, or on my own.

So this week, I got tired of Noah asking every day all afternoon, when can I play my DS? I told him, "You will go outside between 2:00 and 4:00. You can take a book or do other things but you'll stay outside." To be fair, I actually stay outside most of that time too, mostly because the dog needs to be out. 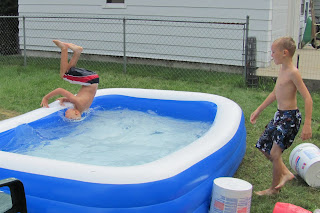 quite different when it comes to the "Stay Outside" requirement. Aaron for the most part would rather be outside all day, riding his bike, climbing on anything he can think of, or getting wet in way he can. Noah, on the other hand, would rather sit inside all day and would be happy to sit with his legos, pokemon cards and books if I let him. Learning to love being outside more is another benefit I hope he gains from scouting.

So when I made the stay outside for two hours declaration again yesterday, I was pleased when I heard Noah say. "Well, Aaron, just like Phineas and Ferb say, It's up to US to make our own fun!"

And I was pretty pleased to see what they actually came up with.

If you re not familiar with the above mentioned Disney Channel show, it's main premise is two boys finding some radical things to do in their back yard to entertain themselves each day of the summer vacation, usually annoying their big sister in the process. Everyone who knows me knows that I am pretty picky about what the kids watch, but I have to admit that this show (other than an occasional "stupid" once in awhile) is pretty funny and quite intelligent.

So the other day, whil 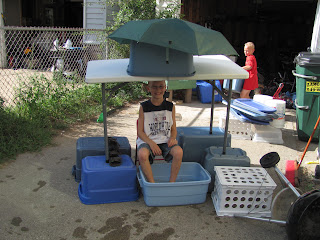 e I was getting out of the shower and getting ready for the day, I heard the boys tramping up and own the stairs and heading outside with every single Rubbermaid tub I had (and I have a lot). I am trying to be be better about just letting them go with their imaginations as long a no one's getting hurt. Next I heard the water running outside, which is for the most part okay. After about 45 minutes, I still hadn't heard any fighting (unheard of) so I went out to see what they were up to.

A Homemade Spa. I asked Noah, "How do you even know what a spa is?" and his answer was of course, Phineas and Ferb had made one.

Of course, a small lecture had to follow to Aaron, who had hammered a hole into the bottom of one of the tubs so that he could stick the umbrella in, but I was still impressed with their design. And they have sitting in their spa every day this week.

The boys have been explor 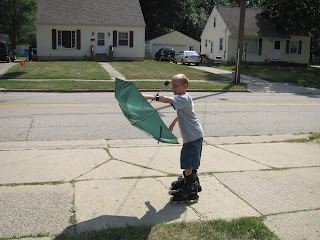 ing the garage when I am outside with the dog and Noah found my old roller blades. They're size 8 and way too big for him. But he is convinced that they fit him just fine and has been out roller blading with them every day. I guess that is going to have to be one of his three Christmas presents this year. So, he "made his own fun" again yesterday when he tried to make the umbrella catch the wind and blow him along. He was pretty sad when it didn't work, but not discouraged. He just told me that he needs to wait for a windier day.

And when I put the sprinkler on fo 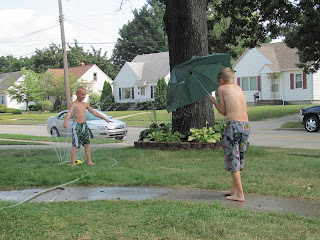 r Aaron (did I mention his water fetish?), Noah decided to join in the fun, which was kind of uncharacteristic for him. Until I saw how he decided to play. Yup, umbrella activity number three. Good thing this was a dollar store umbrella, because the sprinkler activities did it in and it went to garbage shortly after this photo was taken. 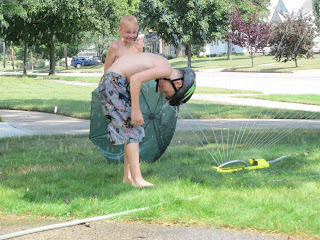 How about seeing if your head gets wet if you stick it into the water with you helmet on.

Today we are babysitting the neighbor kids and I am heading in to turn off the TV. I wonder what kind of fun 4 kids (more like three since Aaron is wandering around being grumpy this morning) can create today. I guess we'll just have to wait and see.

And keep the camera ready.
Posted by Kristi at 6:37 AM

I think this post proves that you boys and my kids would get along wonderfully! ...
LOVE all the pictures and the things these boys come up with-- very creative!
GReat Job!

My mom always kicked us out too. Outside after breakfast and not to come back until we could see the fireflies. We learned to use our imaginations, how to make new friends, how to solve arguments and most importantly, how to be independent. Nothing was organized for us. Nothing was scheduled. We just played. Good for you for letting your boys learn the same lessons themselves.