They BOTH Got Picked

Whenever I ever attend an "audience participation" event, I never get picked. It's just the way it is. I must have that look of "BORING" stamped across my forehead. In contrast, Steve has gotten picked numerous times. He has the look of "GOOFY".

I take the boys to a lot of library events in the summer, mostly just to break up the monotony of summer days. A lot of the programs are the same from year to year. It holds true this year as well. We saw two different magicians last year and the same ones were on tap for this year too.

But we still had to go check them out.

It was pretty exciting when Noah got picked to be the first "assistant". I was glad I had brought the camera. He can be such an oddball sometimes. In some ways, he is shy and doesn't want to try new things, but in other ways, he is a complete show off and ham.

This was one of the ha 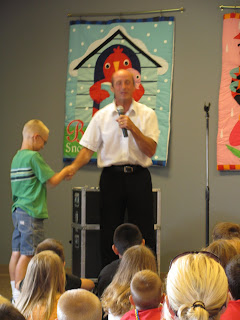 m moments. As he was coming up, the magician played some music and Noah literally DANCED his way all the way up. The magician got a good idea the kind of kid he was dealing with. These people really have to be good on their toes when they rely their program on the reactions of kids in their act. 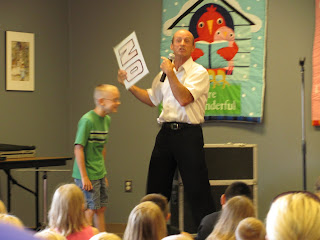 ing he did was hide a piece of paper and ask Noah if he knows what was on the other side. Every other time when we have seen this act, the child has done as was expected and answered "no" and was tricked when the magician turned the paper over and it said "NO". But not Noah. Mr. Ham said yes and made the trick not work. I felt kind of sorry for the guy until he switched it on Noah, turned the card over, asked again, and then when Noah answered"No", he turned it to say "ON". Smart guy.

The trick went on and 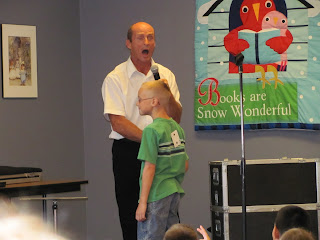 he had Noah pick a card. The magician was supposed to guess which card it was and after Noah was giggling because the magician was "getting it wrong" he turned around and the correct card was ON HIS BACK. Pretty funny. I'm glad Noah was a good sport about the whole thing.


So the trick was over, Noah sat down and the show went on... 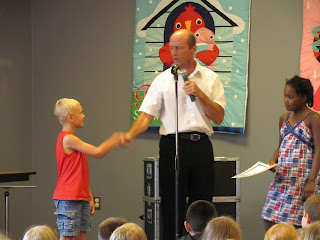 asked again for volunteers. Lo and behold, who should get picked ti time but Aaron. I couldn't believe it. This time, he came up with another little girl who was supposedly reading direction to tell the magician how to perform the trick.

It went on and Aaron was a very good sport w 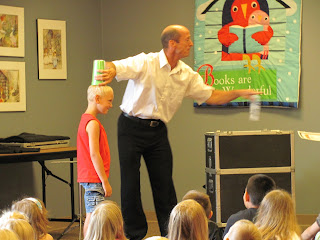 hile the magician continued to do silly things to him, per the instruction card the other girl was reading.

I don't remember the en 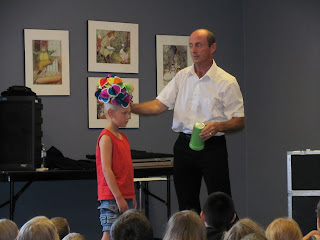 tire trick but the end resulted in a bunch of flowers atop Aaron's head. Even though the picture doesn't show it, Aaron was giggling and so excited when flowers showed up on his head. It was just too cute.

The final trick of the show, even though it didn't involve volunteers, was really amazing. He turned three doves into a rabbit. I have seen him do it at least four times now and I still just can;t believe it. So it was an eventful morning at the library. The kids have been talking about it ever since. I wonder what will happen next time we see them.
Posted by Kristi at 3:31 PM

So glad you got pictures and memories to save! :)
When I hear you talk about how Noah is and odd ball but also a ham I think of Shane... he loves the stage and spotlight, but he needs to be the center of it all...weird At church he usually doesn't want to go up on stage... but in a smaller setting, watch out!

Congrats to the boys! How fun! Glad you had the camera along.

My two oldest boys and I are the ones that don't get picked. My youngest is so outgoing and lively that he does get picked. He was chosen to participate at the Lion King show at Animal Kingdom in Disney World, but was so overwhelmed he nearly cried!