Happy Independence Day everyone. I saw a great sign posted last night on the way home from my parents' house. It said, "If it weren't for the 4th, you couldn't take the 5th". It was a light hearted way for reminding us why we celebrate the 4th of July. I hope to remember it.

Anyway, it is always interesting figuring out a happy mix between regular 4th of July activities, and a birthday celebration for Noah, who shares his birthday with America.

We always work it out. This year was a little different though since the 4th of July celebration that we usually attend is being held tonight (the 5th) instead.

Noah had wanted a "friend" party 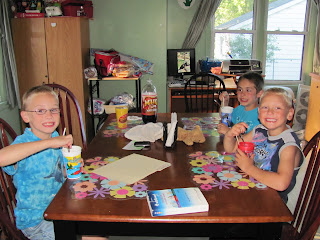 this year, but with summer vacation and the holiday weekend, It just didn't seem feasible. So instead I offered to let him have a his first sleep over with a friend. B came over around 4:00 in the afternoon and the boys played inside and out. Little brother Aaron had a little trouble figuring out where he fit in, but B is a bit younger acting and at times played with Aaron while Noah wanted to go quietly play with something else. It was fine. After some swimming in the neighbor's pool, I took them for pizza (since Steve was working late again) and we came back and they watched a movie. Noah's big birthday request was root beer floats, which we did right before bed. 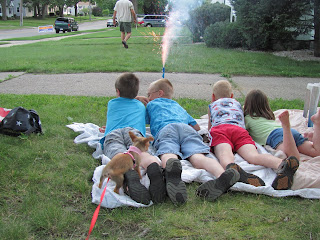 r neighbor's, get some fireworks and have a mini-show on their driveway every year. So we took the boys over that evening before bed. It was the first year that our boys had seen them since we usually put them to bed before they start. They enjoyed laying on the blanket watching them, with Lily in tow of course. 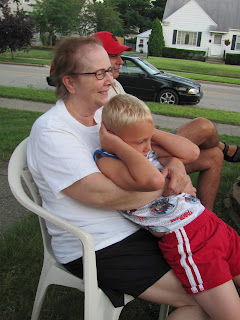 his position of freaking out over the noise and ran to Grandma C, our neighbor grandma) and hid with her during the really loud ones. I wonder if he will ever grow out of that. I guess we'll see at the big fireworks show tonight. 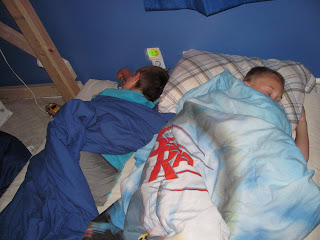 I pulled the mattress from our futon downstairs and put it on Noah's floor since I didn't want to have both boys up in Noah's loft bed to sleep. When we got back, the boys quickly got into pjs and headed to the futon. After a little tucking in and instructions that they could whisper for awhile before going to sleep, I left them alone. I was happy when by 10:23 both boys were sound asleep and we were free to go to bed as well.

We kept Saturday pretty low key. Giving Aaron a nap proved to be a saving grace and we just had a really nice day after Steve got home. Since he's been working so many hours, it was awesome to spend as few hours just talking to each other about everything. I don't think we've done that in awhile. The boys must have picked up on it too because there was less fighting and fewer temper tantrums than we have had in weeks.

A few weeks ago I had asked my parents if we could do a simple birthday party for Noah at their house while all of the cousins were going to be visiting. So on Sunday (after skipping church...bad Wheelz Family), we packed up many bags full of stuff, including the dog, and headed up to their place. After droppipng off 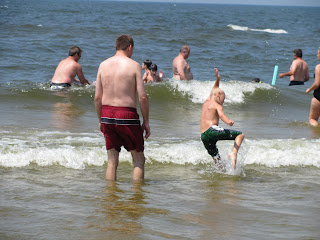 Lily, we headed over to the beach. It was an absolutely beautiful day. The waves were huge and the outside temperature was high. Perfect beach weather. This particular beach is great because it has a playground right nearby too. The boys spent the time going back and forth between the playground and the beach. It worked out well so Steve could be in the water with one while the other was off playing. Of course, I assumed my preferred position of photographer for most of it. I got a lot of great pictures of Aaron and Steve jumping the huge waves. Not so many of Noah though because he went out so far that most of the pictures were of their heads only. Not nearly as thrilling for photography, but I assure you they had a blast.

Afterward we went b 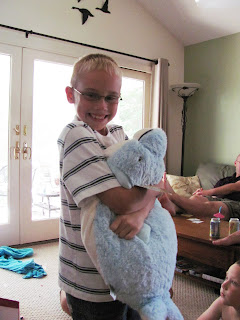 ack to my parents' house to have some birthday celebrations for Noah. He was a very happy boy all day and loved everything. He has declared many times that it was the "Best Birthday Ever". I will be sharing birthday pictures later this week. I figured this post was going to long enough as it was :) The only thing he was sad about was that we both remembered this morning that we forgot to give the cousins their goody bags. We left them at my parents' though so maybe he can give them to the kids on Thursday when we see everyone again.

Lily got lots of cha 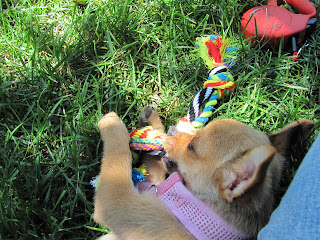 nces to play with all of her cousins as well. My SIL had picked up couple of baby presents for her and she spent most of the day playing with a little rope toy they had gotten her. I got a ton of really neat pictures of my niece, K, with her as well as some of my nephews, P and J, playing wither her as well. I really hope this little pup stays as sweet as she is now. I am so grateful that my parents are willing to let us bring her when we visit. I can't imagine leaving her home in her crate for that many hours alone.

So by the end of the af 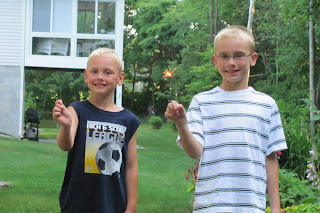 ternoon, everyone was getting tired from the fun and busy day and the boys started asking me about fireworks. I had told them that we wouldn't be watching fireworks that night because we'd be watching them the next night (tonight) instead. But Steve and I were still thinking about stopping somewhere and watching them. My parents then decided to take the kids for a walk over to the little store by their house and get some sparklers for the kids instead. The boys had never done sparklers before, mainly because they scare me. I'm always afraid a kid is going to put a hand on the sparkling part and get burned. The boys however, loved them. I took some pictures of my niece and nephew too that I'll send to my SIL, since they had to leave.

After those, it was time to finally throw the boys in the bath, get their pjs on and head home. We got on he road about 8:30 and Steve and I spent the entire ride home being thankful that we had decided to skip the fireworks that night. It had been a good day, but also tiring and we were in bed by 10 O'Clock, and I think asleep by 10:30.

We have one more celebration tonight with Deb and her kids, minus daddies who will be working, but then our daddy will be on vacation the rest of the week, as am I. Lots of fun adventures ahead I'm sure. I will also share pictures from Noah's birthday celebration some time this week as well.

I am enjoying watching everyone's fireworks pictures. Even though I love my new camera, it doesn't have a firework setting, so I will not get any of those this year. Oh well, I guess I'll have to settle for five crazy kids jumping around and having fun tonight instead. Oh, and a puppy...
Posted by Kristi at 4:58 AM

Sounds like a lot of fun. We have the same problem with Diva's birthday being so close to the 4th. Hubby has promised her her very first sleepover, too. It's going to have to be later in the month, though. We've found out that trying to have kids over around her birthday usually doesn't work well since they are usually on vacation. Of course, we were in Michigan this year for her birthday!

Glad you had a great tiem.