As I have mentioned many times, Noah has been very active with his Cub Scout Pack since he joined in January. I know many people have issues with scouting, as I actually do in a way too. But I have to admit, that the program has been very good for Noah. I like that he works toward achievements and that he receives recognition for his work at each monthly pack meeting.

Tomorrow is the last pack meeting of this school year, where he will officially be promoted to a Bear Scout. He will receive not only his wolf badge, but three arrow pins for all of the electives he did. 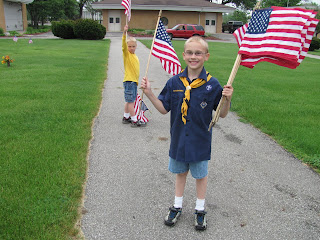 I have learned a few things along the way too. I have learned that a seven year old can do a lot more things than I expected him to do. And also that some things that I he had previously learned may not have been as ingrained as I thought.

This weekend, his scout pack, along with a ton of others, both boy and girl scouts, went to place flags at all of the graves of the veterans at our local cemetery. I did not know that all of the flags across the country that are placed for Memorial Day are placed by scouts. It was a VERY wet and soggy morning and the boys were pretty miserable about getting their feet SOPPING wet. They also needed a LOT of reminding about not letting the American flag drag on the ground, especially after an hour and a half of carrying them around.

Both boys got to take a try at using the hole digger as well, although it really wasn't necessary since the ground was so wet.

There was quite a it of belly aching 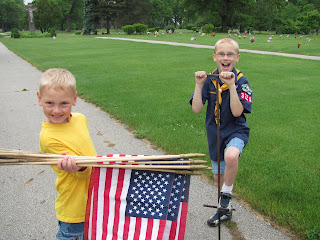 about walking there and back, especially with the wet fee.t But after a small discussion about wet feet being a small price to pay for the people who died for our country, the complaining ceased for the most part.

I was surprised though when we were sitting down to lunch and I had the boys tell Steve about the morning activity. Noah was able to tell him all of the branches of the armed services. So I guess he did learn something from the experience and when we passed a different cemetery later, Noah was the first one to speak up and say, "Mom, look at those flags. Those were placed by scouts just like me."
Posted by Kristi at 5:44 AM

Looks like a great day! What an excellent service to our veterans. I'm so impressed how far Noah got in scouts this year. Way to go Noah!