No, not really in a bad way.

When I was growing up, it was like torture for my mom to drag me along when she was buying flowers for our yard, and even worse when she actually made me HELP. Oh, the tragedy!

But now that I have my own home, I have gotten more and more into it each year. For some reason, I LOVE getting dirty and working on the yard. It is probably one of my favorite pastimes. The majority of the weeds in our yard have been pulled by hand over the years, no matter how tedious just because I enjoy the satisfaction of seeing it so much better. I'm not good at being creative in flower placement what so ever. I have a small house and yard, so no need for a professional landscaper. I don't know the first thing about what grows well in what kind of soil or what should be planted where. It has been eight years of guess work. Actually EXACTLY eight years. We moved into our house eight years ago this week.

When we moved in the yard had nothing. Since my birthday always falls right around the Memorial Day holiday, my parents have always mixed my birthday breakfast with a trip to the local flower store for more plants for our yard. Some things have taken, others have not. 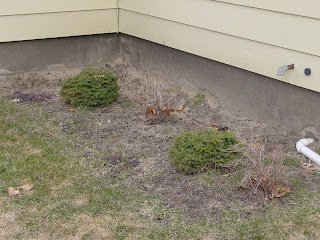 This was our first attempt the first year. They died and we pulled them out the next year when we got out first two lilac bushes.

We have an apple blossom tree that my mom gave us when Noah was a baby that has grown wonderfully and a cherry tree that she gave us when Aaron was little that has died a slow and painful death but I don't have the heart to pull it out of the ground.

I have attempted a la 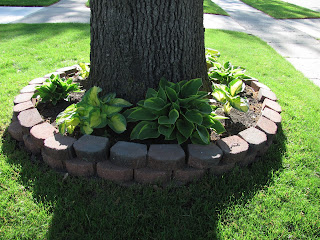 rge number of things around the tree out front but two years ago decided that maybe hostas would be the best. During my tour around the yard yesterday, I confirmed that it was indeed the right route to go. They look great and next spring I will be able to split each of them and start out eight more hostas in the back somewhere.

Yesterday was a BEAU 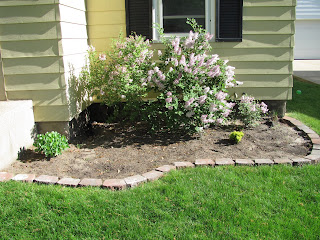 TIFUL warm day and it is he beginning of a long stretch of warm weather coming our way. The first thing I did was open the windows and notice that the larger of my lilac bushes are FINALLY starting to blossom, complete with very strong aroma.

This is when I went crazy. I grabbed the scissors and headed outside. Let me just say, my favorite thing about these lilac bushes is cutting off branches and giving them to people. They smell SO GOOD and it feels good to be able to share them with others.

I started out by just putting som 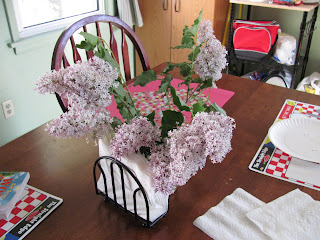 e on the kitchen table. Par for the course, Minnie the Cat was right there ready to pounce, which drives me crazy. I think my cat has OCD when it comes to the flowers. She just CAN'T leave them alone when I bring them in.


After a little while, I needed 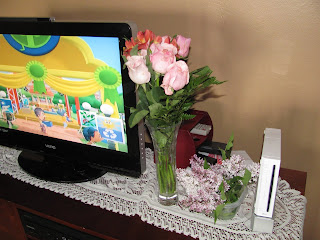 MORE aroma and cut some for the living room. I put them right next to some roses that I received from a piano student at the recital last week. Now the living room too was filled with a wonderful scent.

But Lurking Minnie was soo 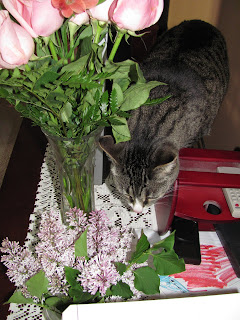 n to follow, trying everything she could to get to those lilacs. 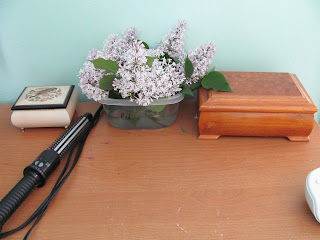 f control. After getting ready to go take my shower, I needed MORE! So I headed out once again and got some for my bedroom dresser. At this point, I opened the bedroom window and Minnie finally settled down in the window sill and I was hoping that would solve the problem.


Since I re-configured the br 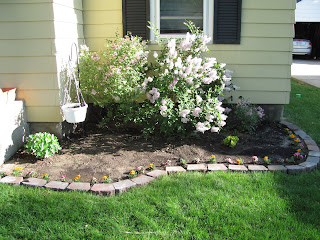 icks in the front, I have been waiting to fill them in with other flora. For my birthday trip next week, I want to get a couple more small bushes to match the little ones that Aaron picked out, as well as a couple more stepping stones leading up to the faucet. But I just always want MORE COLOR in my front. So when Aaron and I ran to the store for a couple of groceries, we strolled through the flowers and Aaron picked out a couple of "value flats" for the front. Since orange is his favorite color, I was thrilled that he picked out marigolds as one of his choices. We brought them home and I set right to work. Aaron was excited that there was a pattern and even Noah, who is oblivious to anything pretty in the world, noticed right away.

Yes, I really am out of control. But it is always so exciting to see the fruits of one's labor when it comes to the yard. My neighbor on one side is completely obsessive about her yard and the neighbor on the other side mows his lawn maybe three times a season, and has no flora of worth at all. I guess it's good that we sit right in the middle, doing the best we can to make it pretty with limited budget and faring pretty well.

BTW, I came home from my rehearsal at Aaron's school yesterday afternoon to find ONE of the arrangements tipped and water everywhere. I could have been annoyed, but instead I was impressed that Super Minnie only dumped one, and that it was the one that was NOT in a breakable glass. We'll see how she does today:) 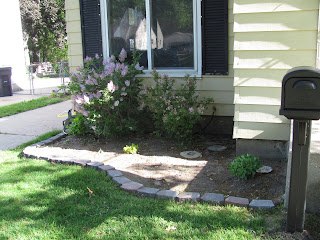 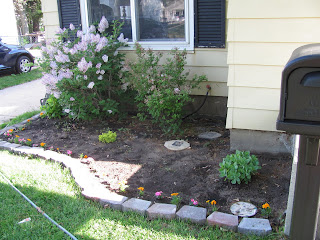 Oh, I so get that. I'm the same way. I bought a ton of plants on Monday at Stein. I went for quantity this year. Lots of value flats. I figure they'll get bigger and fill in as the summer goes on. Your yard looks great! I love the new arrangement of the bricks.

One day soon...
you might inspire me :) --
but for now- I still leave the flowers up to my daughter and her Daddy...

oh please please come and be outta control at my house :-) I have no knowhow or time and my yard just looks so awful right now.. yours look beautiful..

That must be a peaceful place to take a photowalk. Lovely shots.My Fav is the last one. Iflorist.co.uk