I only have a couple of pictures from this weekend. Not because it wasn't busy, but because I just didn't take any. And the weekend was kind of a strange one in a lot of ways, especially since I spent the majority of it AWAY from my kids.

But the good thing was that for the first time EVER, we managed to visit ALL FOUR of the grandmothers in Mother's Day weekend. Usually, because of the relationship between my mother and myself, or because of Wheelz Family (Steve's family) drama, there always seem to be obstacles. But it actually worked out this time.

My mother who lives in Illinois alwa 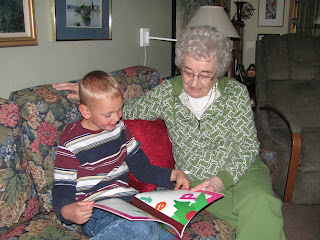 ys comes to visit my grandma about an hour way from here sometime in May. This past Friday, after a doctor appt (more about that later) while Aaron had the day off of school I took him down for a visit for a couple of hours. My grandma, who was a school teacher all of her life, was blown away by Aaron's reading. And he was thrilled to have a new audience to which he could show off to his heart's content. At 94 years old, I am limited to how many mother's days I have left with my grandma (even though she is amazing, walking several miles a day and still driving, living on her own, etc) so I am always glad when I can get down there for a visit. We spent some time talking about hymnals and some of our favorite hymns. It was a neat discussion. The visit with MY mom was interesting as always. My 37th birthday is coming up in a couple of weeks and the woman still doesn't know the date. AND, the classy woman that she is, she TOOK OUT HER PARTIAL at the public table where we were having ice cream. Despite the fact that out relationship will never be close, I was glad that she got to see Aaron for a little while. 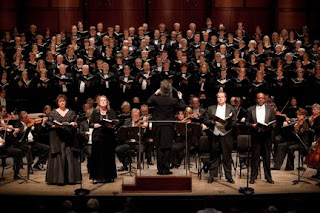 , the symphony chorus in which I have been singing had our final performance of the year. We performed Verdi's Requiem which is a HUGE piece of of music, loud, beautiful and tiring. It took up the majority of last week in rehearsals but I loved performing it. I am kind of bummed that chorus is done for the year, but I really look forward to starting up again in the fall and being part of the group for the entire season next year. Our review in the paper wasn't perfect and the picture of the chorus cut me off, but the memories I will have of the performance will stay with and I have been singing the melodies constantly ever since.

On Saturday, Steve's family (after A LOT of drama) had a big extended family get together at his brother's house about an hour and a half away from here. There was no way I would be able to go and still be able to make to to my concert that night so the boys headed off without me. I was pretty stressed about being the whole day away from the kids, but from what I understood, they had a good time and Steve's mom could have her little brag that she had all of her grandkids with her to worship the ground she walks on (okay, a little sarcasm, but it's allowed once in awhile, right?). 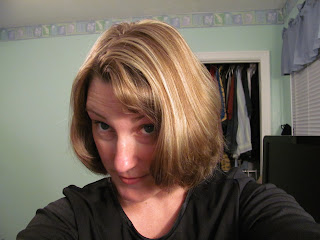 were going to be gone all day, I felt the need to use my time wisely...or selfishly. I chose selfish and took myself to a salon for some pampering. I have been growing my bangs out for a little over a month now and they are starting to actually look longer. But I still needed a major pick me up. It came. In the form of getting my eyebrows waxed, followed by my first time ever getting my hair highlighted. I know it is awfully conceited to write an entire paragraph on my hair, but it really was a big pick me up. I can't believe the difference it makes to me. The stylist also trimmed the heaviness out of the bangs growing out so that they lie flatter, and I even topped it off with throwing out my old liquid foundation, and trying out some new powder makeup. In all, I think I love my new look, even if no one else actually notices. So, for Mother's Day (and my birthday present) I treated myself to s a little piece of glamour. I never got a "before" picture since I didn't know it was coming and the "after" doesn't really show that it turned out looking pretty nice, but you ll just have to trust me on it.

So Sunday, Steve was all tuckered out from the new duties he's taken on at work and decided he needed to sleep in instead of going to church. I was a little disappointed since I really like this new church, but I understood and we had a leisurely morning at home. After an early lunch, we packed into the car to visit my parents, the fourth grandma. My step mom is actually the mother figure in my life so I was glad that we were able to get up there too. The boys had painted a vase for her earlier this week and I put some more of my lilacs in the vase and we headed up there. My sister and her family stopped by a little while after we got there and the boys got to play with their cousins for a few hours and we all had a really nice visit.

By the time we got home, it was time for baths, some board game s(Noah is really starting to make some good chess moves) and then off for an early bedtime.

It's a busy week ahead, with school "special days" galore, an ultrasound for me (not for a baby), baseball games starting, double scout activities, and my student recital on Saturday. The recital prep will take a large portion of my free hours while Aaron is at school and I also signed on with Aaron's school to accompany for the middle school choir concert again, so I will be in the classroom numerous times this week and next week practicing with the kids. Noah also has a school concert this week and Aaron has grandparents day (which may be grandparent-less for him). I agree with my friend Deb when she posted her FB status last week "You know it's the end of the year when every day is a "special" day. But with 19 days of school left, these "special" days really are special and it will just be a few short weeks until we're all saying "What are we going to do with these kids all summer?"

Hope you all had a great Mother's Day weekend too.
Posted by Kristi at 6:27 AM

I LOVE your new hair do... VERY grown up ... but a bit sassy -- I really like it alot!
yahoo for you! :)
Can I just give you a high five for making it thru the weekend ? We had a some family drama also but I was able to not have it affect me as much, so I can relate! :)
Take care! :) only happy thoughts ahead!

The new hair looks great! Isn't it nice to get a little bit of pampering occasionally? Sounds like a good weekend. I can't believe you only have 19 days of school. We have 5 weeks left. We haven't even started the count down yet. Have a great week!

Oh I LOVE your hair highlights. I just started coloring and highlighting 2 years ago - when I was 37 - myself! It gets pricey let me tell you. But as a nice treat heading into the summer I think it is worth it. Especially since you are in the bang growing process - a treat for yourself is always worthy on Mother's Day weekend. Makes you feel better about yourself - and when momma's happy, everyone's happy!

Love the hair!! And I'm glad that you made it through the week and weekend ok. :)

Your hair looks AWESOME!! Very stylish!! I think - I'm pretty outdated myself but it looks great!

I went to the bookstore and hung out by myself - it was totally what I wanted to do, even though my husband didn't "get" it :)