It was quite a busy weekend for the Wheelz crew. My SIL was here with her three kids, followed by my brother on Saturday. Along with my stepmom, three other nieces, her friend and HER grand kids, ( a total of ten kids for those of you who lost count) we were very busy with fun activities throughout the weekend.

The weekend weather started out BEAUTIFUL, especially on Friday with record temps in the 80's so we spent the day outside. Noah was supposed to have school still but since everyone else was out, we started his spring break a day early. We spent a lot of time outside. We even got a picnic dinner at McDonald's and headed over to a park to play for several hours. 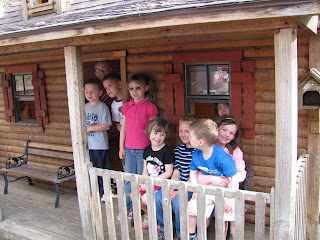 olutely beautiful so we met the rest of the crew at the zoo for the morning. I found out after I got home that there had been a HUGE Easter egg hunt on the grounds of the zoo at the same time we were there even though we didn't notice, which I thought was pretty funny. As the morning went on, it started getting increasingly chillier until we stopped to get the kids lunch and all the kids started getting so cold that they were shivering. About thirty seconds after we got all kinds in the car to leave, it started DOWN POURING.


Perfect timing for our zoo trip.

After taking all kids back fo 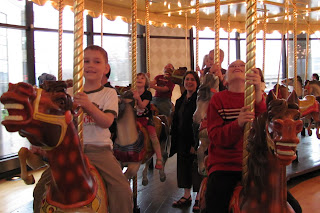 r naps/rest times, my SIL and I took our kids to the Public Museum so they could see the Big Bugs exhibit that I have posted about numerous times. We stayed in that area for a long time and the kids really had a good time, although I think the highlight for my niece especially was the ride on the carousel. This was the first time I had actually ridden the carousel with the kids and finally got some decent pictures on the ride.

After the museum, we went for dinner and then back to their hotel to swim until bedtime. It was definitely a very busy day but one that I think the kids will remember for quite awhile. We aren't able to take the boys to a hotel this week like we had promised them, so I think it was good that they still got to swim with their cousins at theirs. They crashed pretty much instantly when we got home, which is ALWAYS good.

Sunday morning came Easter. It was definitely different than the last decade, since we are going to a new church. The service was a different experience but I am still glad that we have found somewhere (at least for now) where we can worship and feel comfortable.

After church, we came home for a l 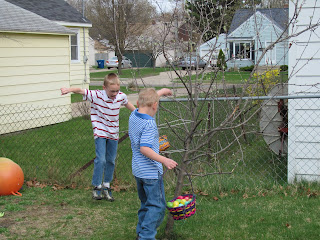 ittle while and let the boys "search" for eggs filled with jelly beans in the backyard. Steve had put them out in the pitch black at about 11 PM the night before,m when we actually remembered about them after the long day. They had fun with minimal screaming (I will post about THAT tomorrow) and definitely found plenty of eggs. 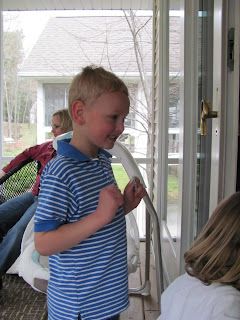 Then it was time to head to my parents for Easter dinner. It was back to being pretty nice outside, even though a bit windy, so the kids were able to spend some more time outside. Another one of my SILs had hidden eggs around the yard for my niece to find and there were a few left in the back. Aaron was so excited to find one, and even more amazed when he opened it up and found a dollar inside. He has talked about it constantly since and I think we may need to continue that tradition in a few eggs next year.

Noah got it into his hea 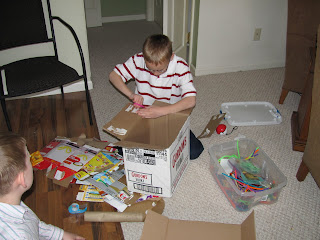 d to make a Pokemon house with cardboard from grandma's garage and set up a workshop with one of his cousins. They must have sat there for at least an hour, and had the mess to prove it.


While the boys were making 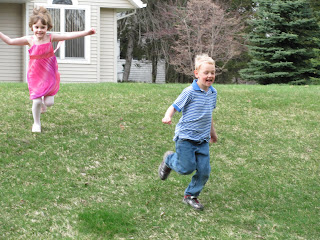 cardboard creations, Aaron decided he wanted to walk over and roll down a hill by the house. He loves that hill and asks to go there every time we're visiting. So we took the littler cousins down to the hill. Grandma is such a good sport, rolling down with them, and even allowing the two "wild ones" to run into her and "tackle" her. I got several great pictures of them playing with her. You could just see the joy in all of their faces.

We came home to go pitch 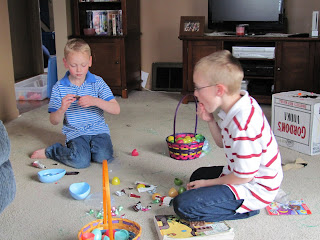 some balls to the boys so the could use their new bat that they got for Easter. But by the time we got home, all they really wanted to do was eat candy. In the past, I would let them have a few pieces, and then save some for each day. I decided to try a different approach this year. I just let them eat to their hearts content. They were so shocked that I think both of them ate almost all of it, but then both decided that they had had enough. As of this writing, neither has asked for anymore candy. I think it may have been the way to go. The candy is gone, they got to indulge, and I don't have to worry about them trying to be sneaky for the next week.

It was a very fun weekend and a nice Easter day. This week we're on Spring Break so I am going to try to find fun things to do each day. Steve took vacation days from work tomorrow and Wednesday just so we could spend some time together as a family which will be nice. After a talk with my step mom yesterday, I am working on making some changes in our house with one of our children, which actually seems to be working with the other one too. I will post on that tomorrow.

I hope you all had a wonderful Resurrection Day as well. See you tomorrow :)
Posted by Kristi at 5:26 AM

Sounds like a great weekend all around! We did the same thing candy-wise and I'm so glad that it's gone. :)

Sounds like a fabulous weekend. The boys look so happy! Happy Easter!