Tackle It Tuesday (On Wednesday)

We're on Spring Break and we've been making the most of it (to the best of our ability). Facebook updates from every single one of my in-laws are all about what wonderful times they're having in Florida and Mexico and everyone else we know is gearing up for or returning from wonderful trips away. We originally were hoping to go to Mall of America for Spring Break but ended up getting hit hard at tax time. As a consolation, we told the boys we would take them for an overnight to Lansing to see the state's capital this week. That, too, got downgraded as bills started piling up. So here I sit, with a very small checking account balance, no gas in the car, and no food in the fridge, trying to figure out a way to make Day Three of spring break fun for the kids.

What is the result?

I have to admit, ev 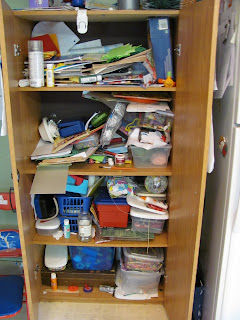 ery time I decide to clean the craft cabinet, the kids have a blast. Noah declares each time a "Craft Day" and makes the most of it. The usual result is a clean cabinet but messy everywhere else from all of the treasures that they make.

This time it took two days, since we were very tired when we got home from swimming last night. But it feels good to have at least tackled one thing in the house. It makes me feel like less of a sloppy mess, both as a parent and a person.

The before picture is pretty awful. It got to the point that each time we opened it, we had to brace for anything falling out on us. And I couldn't even get mad at the kids for not putting things away in there because nothing had its own place anymore.

So, rather than my usual Full Attack where I take everything out and start from scratch, I went shelf by shelf, which actually 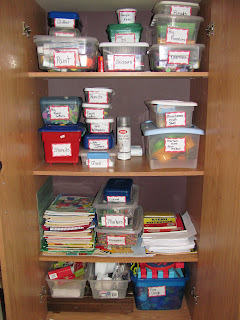 worked very well this time. I also labeled the front, side, and top of every single bin, hopefully making it easier for the boys to actually put stuff away when they're done with something. We have had the discussion already about which shelves are "fair game" and which ones are "ask permission first".


The thing that amazes me the most is that EVERY SINGLE
ONE of those containers was already in that cabinet, but obviously not being used the most efficiently :)

So the tackle done, the blog post written, kids are dressed, hubby is out of the shower, and it's time to go find something to do as a family today.


Game Day/Night is looking good.
Posted by Kristi at 7:21 AM

Looks great Kristi! I hope you had fun today.