So those of you who are my facebook friends have seen all of our big events from the weekend, but I'm going to share them here to, mostly because I like to have a digital journal of our happenings in the Wheelz Home. I have found numerous times over the time I have been blogging that both Steve and I have gone back through my blog to find out when exactly something happened.

This weekend marked the end of a VERY long three weeks for me. Between a large number of extra commitments, I had missed bedtimes for three weeks and really felt like I have just been out of touch with everything. I am so happy to be back into reality again.

5. Four Eyes
On Friday after I dr 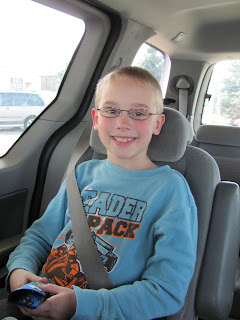 opped Aaron off at school, I picked Noah up early and we headed out to pick up his new glasses. I wanted him to have this first experience without little brother vying for attention. And it was so cool. He really didn't realize (I didn't either) just how blurry everything had looked until he put them on. The entire weekend was spent listening to him say "Mom, look at that!" about everything. At church he was amazed at how clear the big television screen looked and he even mentioned that what he used to think was one tree was actually more than that. And he was one very excited little boy to wear them to school today.

I really hope everyone is nice to him and no one makes fun of him. And I have bets going as to how long until this first pair breaks :(

4. Solo Ensemble
One of the many things that was eating up a TON of my time in the evenings was preparing for solo ensemble. I accompanied five kids this year which meant I had to fit in ten extra half hour practices as well as give up a huge portion of my Saturday for their performances. Steve took the boys to Playworld (a glorified McDonald's play area) while I was gone and all five of my kids got a I rating (the best) so it was worth all of the work.

3. Monteverdi's Vespers
As you all know, when I le 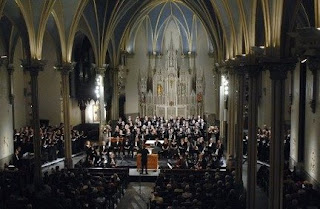 ft our church, I joined the Grand Rapids Symphony Chorus as a way to still use my musical abilities. This weekend was my first performance with them. After three rehearsals all last week plus the performance on Friday and Saturday night, I was completely beat but the performance got a four star (out of four) rating by the paper and it was a huge success. I had a problem throughout (see below) which made me enjoy the performance less than I normally would have, especially the first night, but I really enjoy this group being with other musicians and I hope to be part of it for many years to come, although I am skipping out on tonight's rehearsal. I haven''t missed one yet and I am determined to not miss any bedtimes this week.

2. Back Pain
I know everyone experi 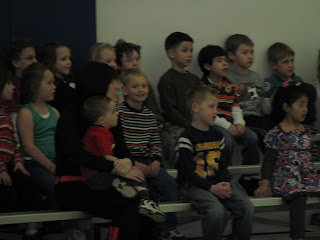 ences this at times. But this weekend I have been stricken terribly. It started out last weekend in my neck and by Thursday, I was in excruciating pain. I think I made it even worse on Friday when I helped at Aaron's school with Jump Rope For the Heart and leaned over for an hour twisting a long rope for five and six year olds. By the time I got to the concert Friday night, I had taken some Aleve and was still in very bad pain. I took two more Motrin and suffered (literally) through the performance. Between standing for the full 100 minute performance and holding up a two pound music score, I was in tears by the time the performance was over, barely able to move walking down the stairs to collect my stuff afterward.
For Saturday's performance, I called Deb, knowing that they probably still had some "heavier" meds left over from numerous issues they have had, and she had some Darvocet and 800 mg IB, which did the trick nicely to get through Saturday night's performance. I am still hurting, but not as bad and I think I will just be nursing it as much as I can this week. Another reason why I am not going to tonight's chorus rehearsal.

1. Parent's Visit
Not a huge deal, but Sunday after church we went up to visit with my parents for a few hours. They had been gone for awhile and we had been busy before that so we hadn't seen them since Christmas, even though we only live 45 minutes away. I am ashamed that it's been that long and I don't plan to make it that long again. We are going to try to get up there somewhat regularly on Sundays to avoid that big span again. It was nice to spend some time with my step brother, his wife and their young baby and actually visit with them. Usually we have so many people there that we don't have much of a chance to talk. And Aaron loved playing with Baby Lucy, his newest cousin.

The Week Ahead:
I delayed my church post last week, mostly because between the craziness and my back pain, sitting at the computer was challenging. I think it's done and ready for posting this week. It's TV Turn off week which means that I can't be on the computer whenever Noah is awake or at home, which is good for me. As a matter of fact, as soon as I finish this, I am going to to get off and take advantage of TV Turnoff week to reduce my computer usage as well. Aaron is trying to get sick again, silly kid, which could make for an interesting week as well. And I have lots of cleaning to make up for my three weeks of not getting much done around the house. Probably in short spurts between giving my back a rest though.

I'm glad everything went well. It's hard to do a concert when you're in pain. Usually mine is in my right wrist which I use to hold up my oboe. Thank heavens for good pain meds.

I have worn glasses since I was 7 and probably needed them much sooner. I was afraid the kids would laugh at me (we moved a lot - I was always the new kid) so I would take them off as soon as I got out of site of our house on my walk to school. And I wouldn't wear them until I got back to our driveway. Then one day my teacher told my folks that she thought I needed glasses in order to see the board in school. Oops! Busted.

I remember when I got contacts when I was 14. For the first time I could actually see blades of grass instead of a generic green plane of grass. And had peripheral vision that was clear. So cool! Go Noah!

I like the glasses,my Jessica has glasses and I really like how they look on her face! -- She has been super good with the glasses, I am so proud!
Being at a concert with pain, wow you are a trooper!
:)