Tackle It Tuesday: Out With The Old...In With the New 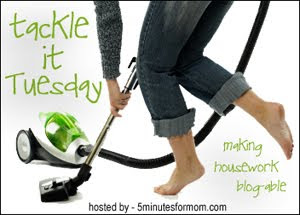 As anyone who reads me knows, we have an old house in which Murphy lives (you know...Murphy's law) It is also an old house in need of much work. In the almost eight years we've lived here, we have managed to make improvements little by little.

Usually with our tax refund, we are able to get something improved in our house as well as save a little for a vacation. This year, due to some challenges, we don't have enough for a vacation, so we are taking even more joy in the much over-do improvement we needed. 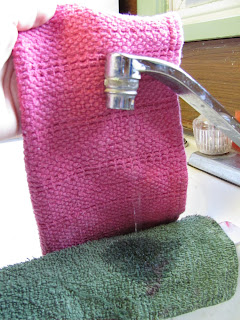 We have had a drip (more like a steady stream) coming from our kitchen sink for a good six months now. You could always tell which appliance was running by how strong the stream from our kitchen sink was. The bathroom shower caused a pretty strong drip, the washer downstairs pretty much created a waterfall, and when everything was off, a constant slower drip was enough to drive someone (me) batty while I was sitting next to it using the computer.

In addition, our old orig 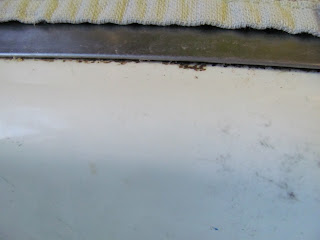 inal cast iron sink was so nasty, with scratches and scrapes in the basin, as well as so much gunk caked in the handles and the edges that I could never get it clean. Plus, since Steve is the sole dish washer in our home (yup, I'm, THAT lucky), he really wanted a sprayer for doing dishes.

So, this year's home improvement 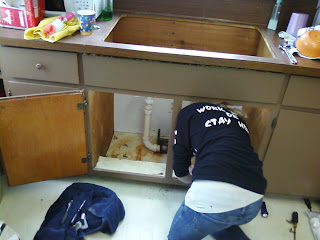 was a new kitchen sink. Steve had replaced much of the plumbing underneath so he was well prepared when his brother and our niece got to our house this Sunday to help hm install it. I got the boys out of the house and they had it done in about an hour and a half. Apparently, Murphy decided to stay away, thankfully.


The biggest challenge was the weight of th 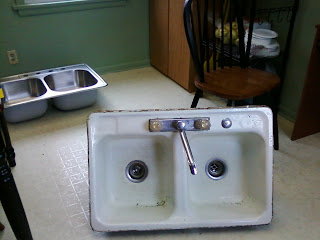 e thing, estimated at about eighty pounds. Steve has since said that he's pretty sure he could have done the whole project by himself, if it hadn't been for the weight of the sink FALLING INTO the cupboard when they first removed the seal around it. You can definitely see how gross the thing was.

And for the final product.. 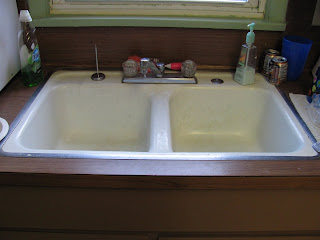 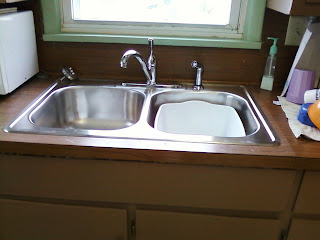 I'm still getting used to the look when I come into the kitchen because it's so different. But it sure is pretty.

BTW, it's National Pancake Day and IHOP is giving away free pancakes, in hopes that you will take the money you would have spent and donate it to a worthy charity. The boys are both having pancakes in school tho "celebrate" the day as well. There sure are some weird "holidays".

Wow, it looks great! Our kitchen sink has a drip as well. I keep reminding mark to fix it, but it's still on the honey do list. Enjoy the pancakes.

Our bathroom is half done...:)
I got to use the shower... I am so happy...but I can't wait to have the whole bathroom back!

You are lucky that it only lasted a weekend...
Glad to hear Murphy was away...