I had two improvisations during this holiday season that I took pictures of, just thinking that they might need to make it into the blog at some point. Aren't you lucky? I am making my new folders for 2010 pictures and just found them.

We had a ton more Christmas lights this year to put away, since we had a real tree, rather than a pre-lit artificial one as in past years. So when I was taking the lights off while putting the tree away, I realized that I didn't have some snazzy light reel to keep them from getting all tangled. I looked around and found the first thing I saw.

Yup, one of MANY mismatched lids t 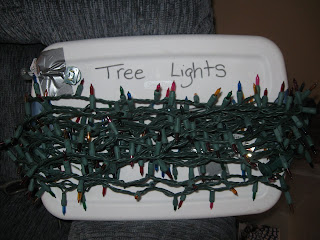 o bins in the basement serves the purpose perfectly for winding up four 100-strands of lights for next year.


Well, my second one will hopefully not offend anyone. I know a lot of people do as I do when they pout their Christmas creche out for Advent. We leave Baby Jesus out, making his arrival on Christmas morning instead. I put the Baby up on top of the cupboard, but I usually leave the empty manger there. As I have mentioned, we allow the kids to "interact" with our creches, believing that it is good to experience the story in whatever way they are moved to.

However, come Christmas Eve after the presents were put out, Steve went to put the Baby out in the manger and we found that the manger was gone. Completely! It still hasn't shown up and I can;t imagine we will find it.

I couldn't bring myself to putting the baby on the floor. So I went digging in the kitchen to find something that would work. The best thing that came to mind? 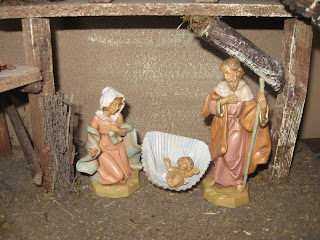 Yeah, a muffin cup from the muffins I had just made for Christmas morning breakfast. It is now two weeks after Christmas and I have decided to leave our creche out throughout the year this year, rather than putting it away. I think it will help us all to keep it foremost in our thoughts.

But I think we may have to find a new manger for next year, don't you think?
Posted by Kristi at 7:30 PM

like the new layout and love the new manger!!!! maybe it will show up. hope you are well...enjoy your blog..jennifer

Beth@Not a Bow in Sight said...

Hahahaha! That is too cute. Who could be offended by such innovation?