Yup, I'm bringing it back this week. We kept pretty busy this weekend, even though as I sit here, I have no idea what we did. Several of these I will be elaborating on later, but here's our weekend in a nutshell:

5. Aaron Class Party
After much work ( 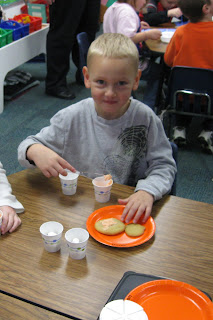 and more cash than comfortable), I planned a pretty good little party for Aaron's class. They don't wear costumes at his school, and dub it a "Harvest Party", but we all know what we really were doing. I had the class do two crafts, decorate cookies, and had also made a little Bingo game. Then they had their treats and it was time to go.

Everyone had a good time, but a strange phenonmenon happened. While all the other kids were hyped on sugar getting ready to go, Aaron went the opposite way. He got VERY sullen and grumpy, refusing to even look at the camera for pictures. The teachers were both completely shocked, saying they had never seen him like that. It opened my eyes up to the possibility of having food issues of some sort with Aaron as well. We'll definitely be keeping an eye on it as time goes on. He actually stayed grumpy the entire remainder of the weekend, though, so who knows.


4. Friday Night Out
Steve had his l 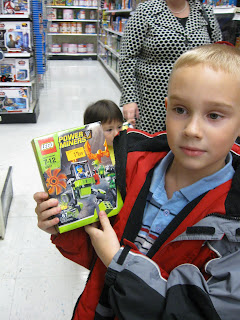 ong driving day so I knew it would just be me and the boys for the afternoon and evening. We came home from school and played for awhile, then decided to go out to Noodles for dinner (our favorite eatery, even though there is something in the pasta that makes the kids go psycho shortly thereafter). Afterward, I took them to Toys R Us to get a head start on their Christmas lists.

I wanted to know what to plan ahead for as I was searching the ads. I was glad I did though, because especially Noah became focused on one kind of lego toy he wanted, and now I won't have to guess. I was a fun night out but both boys were happy at bedtime when I told them that Daddy would be home on Saturday and we could have a full family day.

3. Saturday Halloween
Since it was sup 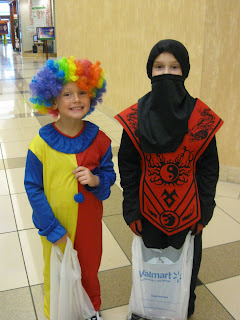 posed to rain, and our neighborhood sees fewer and fewer houses offering treats each year, we decided to forgo neighborhood trick or treating and take the kids to the mall instead. The crowd was bigger than they had ever had before. I am actually going to post about it later this week, since I got some fun pictures. Afterward, we took the boys out for dinner (kids ate free for Halloween) at a local burrito place, and were treated to smoke inhalation as the fans in the restaurant were broken. Hubby still has a headache from it as I write this Sunday night.

We came home just as kids started trick or treating and the kids were thrilled to be handing out candy. I was happy to be getting rid of all of the candy that we had just acquired at the mall anyway.

about the chance at an extra hour of sleep on Sunday morning. But, alas, it was not to be. Noah, my usually good sleeper, was up at 5:00 using the bathroom, and proceeded to visit that room several times again over the next couple of hours, and nobody (except Steve) went back to sleep. However, both boys were in bed and asleep before 7:30 on Sunday night, so I guess it will be a good thing after all.


1. Sunday Afternoon in the Leaves
I am so weird. I 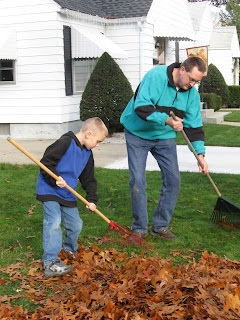 actually enjoy raking leaves. It is one of those jobs that you work your tail off, and you can actually see an obvious result when you're done. Like so many years in the past, I failed to take a before picture. I have a fun little post written about it later this week so I won't share too many pictures of our acventure. I love that the boys are able to help with the task now, even though it took some coaxing after jumping in the huge piles for awhile.

I know we will probably have to rake one more time, but while we were working, apparently the other families around us got motivated as well and we had four houses all out raking and cleaning up their yards for the winter together.


Thwe Week Ahead:
We're still waiting for the flu to hit, as I'm sure it has to, since it's hit everyone else we know. I decided against the H1N1 vaccine for the boys last week at the doctor, and I'm hoping that I'm not sorry. This week will be a short week, since Noah has a three day week of school and Aaron a four day, due to conferences. I am starting to worry about Noah's conference on Thursday, since he seems to be slipping lately in behvaior both at home and school.

Hope you had a great weekend and I look forward to visiting you and seeing your Halloween pictures too.
Posted by Kristi at 4:24 PM