This is NOT an advertisement for Ace Hardware in any shape or form.

But....every so often that particular store hosts a "free paint" Saturday and each time, I go to pick out a fun color to inspire my next painting project, which are of course my favorite projects around the house.

This past Saturday, among a bazillion other activities we had planned for the day, was a free paint Saturday.

The boys were kind of in a funk so I decided to take Noah out of the house for awhile and we ended up at the hardware store and I told him to pick out his favorite color paint to paint his loft bed.  I can't believe it was exactly three years ago to the weekend that Steve and his friend built Noah's bed. But in that time, the bed has gotten drawn on, scraped up and banged, bruised and dirty. So, I bought four cheapo paintbrushes and set Noah to work.

We really didn't know how far a pint of paint would stretch and I was shocked when Noah actually asked me to help him so as Steve headed upstairs to take a nap, (it WAS his birthday after all) Noah and I set to work. Aaron was feeling a bit left out so I put him in charge of photography duty during the project, as you will see soon.

As it turns out, a pint is just enough to do two light coats of MOST of a loft bed. Just enough to make a ten year old VERY happy and just enough for his attention span to take. 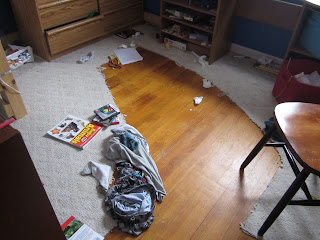 It all started a few weeks ago when Noah had a slight case of stomach virus and decided, rather than running to the bathroom to get sick, he would do it OVER THE SIDE of the loft, splattering nastiness all over the carpet remnant from my parents.

Middle of the night, not gonna wash carpet so Steve and I cut out the nasty stuff and decided to get to the rest later.
What does that have to do with painting the bed you ask? I figure, if we have to get the floor all nasty from paint, why not have Noah paint the bed BEFORE we clear out the rest of the carpet remnant, saving us the trouble of covering the entire floor.

Here is the room BEFORE the project began. 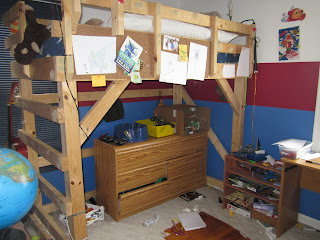 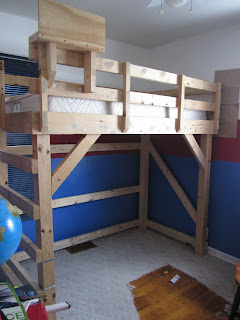 Everything cleared out and ready to begin


Noah really did a great job for his first attempt at painting. After awhile, we settled into a routine of him doing the first coat and I would follow behind with a second coat. 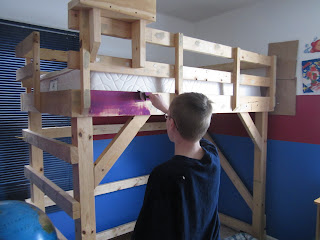 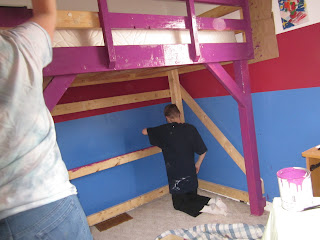 And so begins Aaron's photo shoot of the vent.

Yes,  I spared you the many many many pictures Aaron graced us with of our rear ends 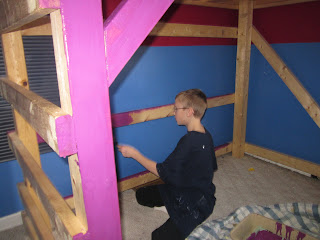 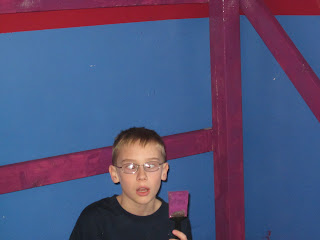 Yes, this is how we were all feeling after about two hours of painting :) 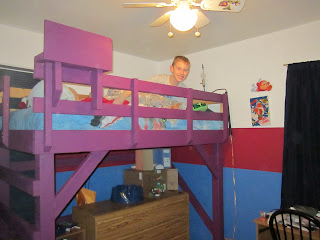