Coming off of my first week of my new job I had really wanted to spend some time relaxing this weekend, and I kind of did a little. My first week at work was a mixed bag of stuff that I will probably not talk about on this blog but it's going to be a rocky ride for sure.

5. Haircut One (and Two)
I avoided getting my ID made at my new job since I was waiting for money to get my haircut this weekend. That was apparently a bad decision since I now look like a fifteen year old boy. I went Friday night to get a haircut but the girl did not understand what I wanted and I left very unhappy. Saturday morning I took a shower thinking it would be better afterward. However, quite the opposite was true and I headed back (with boys in tow since Hubby was gone all day) for another attempt to remedy it but it ended up that she pretty much hacked it all off in an effort to "fix" it.  Good thing hair grows back :( 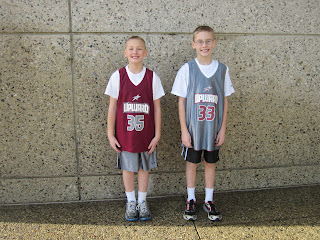 Saturday was a long day since one of the games was at 9 in the morning and the other not until 2 in the afternoon so the boys and I were pretty much dragging time all day, since Hubby had to work and then go to Lansing for a barbershop performance that night. Neither boy scored and Noah didn't even get a shot in. There was not particularly great playing by either of them but they didn't complain and Noah finally got a "Christ likeness" star for his behavior on the court so he was proud of that. Aaron's coach doesn't give stars to every one so he was sad that he hadn't gotten one that week.


3. Shopping One and Two
We finally got a paycheck on Friday so I was able to get some groceries. The boys were so funny since they woke up Saturday morning, went to the fridge for milk and Noah says, "Whoa Mom, look at all the food!" Pretty sad when your ten year old has a fit of gleeful hysteria just because there is actually food on every shelf of your fridge. We are still in transition so it will be a few more weeks before we actually get into a comfortable routine but at least we can eat for this week so that's a good thing. Then, Sunday afternoon I went to attempt to get a pair of pants for work, which of course was depressing and unsuccessful once again. I'll try again in two weeks. 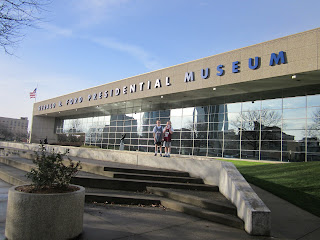 We took my nephew's Flat Stanley to the Presidential Museum Saturday afternoon and then Hubby also took him with them to Lansing (capital of Michigan) so as soon as I get the pictures developed he will be on his way back to Illinois. I hope he enjoyed his stay in Michigan with us.


1. Church
I was very tired Sunday morning and Noah didn't have to run soundboard so since Steve slept in from getting home from Lansing late, I toyed with the idea of staying in bed too,rather than going to church. I was glad that I fought the urge though. The service was about how to bring happiness into your work life which is a message I needed to hear after the week I had last week. I also had invited my partner teacher to the service and I am not sure if she went or not, but if she did, I am excited to talk about the message with her tomorrow. In addition, the music was uplifting as always and I got a chance to chat a little with the mom of a friend of Noah's about the situation at my new job and get some perspective. It was definitely a good thing that I decided not to skip.

The week ahead:
Hopefully armed with the message from church I will be able to stay positive this week, despite the negative attitude of my partner teacher. This week also holds my COURT DATE to fight the ticket I got two months ago for supposedly running a stop sign. I can't imagine how I am going to fight it but I have to at least show up in the off chance that the nasty officer won't show up and I can get out of it. Otherwise, our insurance is going to skyrocket and we are going to be in BIG trouble.
Posted by Kristi at 3:37 PM