So as boring as last weekend was, it was the complete opposite this past weekend. I am actually having a hard time getting anything accomplished today as I come down off of the busyness. Noah too was in quite a doozy of a mood this morning and I am sure he is feeling the effects as well.

But as busy as it was, it was all GOOD busyness so that's a bonus. I think I could do a top ten from this weekend but I will stick to the meme of Five just to be consistent :) 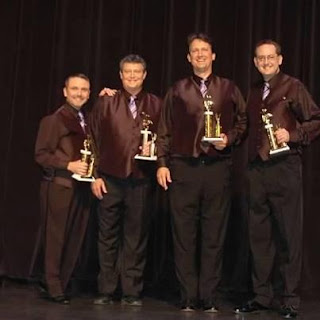 Hubby has been a barbershop singer since he was in middle school and has finally found a quartet to help him reach his dream of becoming  district champion, followed hopefully someday by becoming an international champion. About six months ago (I think) he was approached by three guys were looking for a fourth to complete their quartet. They have worked very hard to prepare and this past weekend was the District competition. Steve had to spend the entire weekend in Battle Creek (about an hour or so away) for the full convention but after much discussion, I decided to take the boys over for the preliminary competition on Friday night, given that the rest of our weekend was booked and I really felt it was important for us to  be part of this event.

We only stayed for the first half but Daddy's quartet blew the rest of them away. they were so much better and really in a completely different league than the rest and it was exciting to hear that they had made it into the finals the following night.

BTW...twenty four hours later, my hubby became a DISTRICT CHAMPION and now will be completing in April to perform on an international stage in Toronto next summer. We're so proud of Daddy!

4. Saturday morning at the Farm 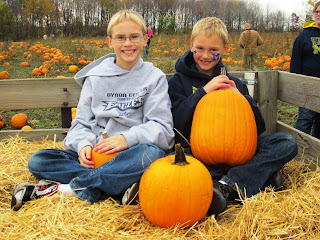 We have had an annual trip to a local Pumpkin Patch with many of the cousins for quite a few years now. This past Saturday was our trip. All fifteen cousins were there and all over the place. I can't believe how much easier this trip is for the Wheelz Family now that the boys are older and don't need quite so much supervision. I had to laugh when, given all the activities and farm animals, the boys spent most of the time trying to pet a farm cat that was lurking around the entire time. The kids picked out excellent pumpkin choices and I am looking forward to getting them carved this afternoon with them.

3. Cousin Fun and Football
We all headed back to grandma and grandpa's after the farm to celebrate the cousin birthdays from this quarter, of which Aaron was part of. It was also a time to watch the first half of the football game (Go Blue!) between Michigan and Michigan State. The kids did pretty well playing together and we stayed until halftime before the boys and I had to head home, knowing Sunday was going to be a busy day as well. Oh, and it was good to be home to watch the last nine seconds of the game, where Michigan kicked a field goal to win the game 12-10. Go Blue!

2. Church
It is so weird t go to church without Steve. I had planned to stay in children's church to watch Noah run the soundboard since I hadn't seen him in action yet, but I decided against it. One thing that made me so happy was being approached by another mom form a boy in his Sunday school class saying how eager she was for her son and Noah to get together for a play date outside of church. I have never been approached by someone that way and it is exciting to finally make a connection at church beyond the superficial stuff. I am planning to take a Monday night off of chorus in a few weeks and attend the event to find a life group in a few weeks, which will helpfully help me o dig deeper into some relationships that might help me o become stronger spiritually. And already this morning that mom texted me inviting Noah to a birthday party for that boy next Saturday, a first for Noah as well. 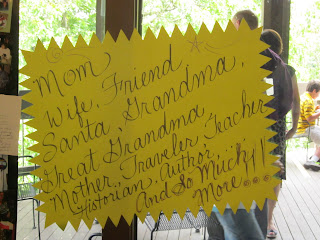 As you know, my grandma passed away a couple of months ago and my aunts had asked my siblings and me to come to their house for an afternoon to go through the remaining items from her apartment to see what we would like to have as heirlooms/mementos. Truthfully, my siblings and I were all dreading the day, not knowing what to expect.

But it was a wonderful afternoon. The visits were relaxed and enjoyable and the divvying up of items went well.  We all received a nutcracker from grandma's very large collection. Of course, we made the mistake of letting Aaron hold his and it is broken already but that's to be expected :)

I also came home with some baby pictures of mine. Before yesterday, I had NONE. Grandma had letters that we had written to her from when we were little, as well as pictures I had drawn when I was only three years old. It was really neat.

We have Aaron's birthday on Thursday, as well as some extra things I need to do at Gymboree this week which is causing some nerves. I haven't figured out how we're going to do Aaron's birthday yet, given that I have to work that night. He is a very excited boy about turning eight.
Posted by Kristi at 6:58 PM