I am here with a much more positive post than the previous one. Huge sigh of relief from all :)

I just want to say that Grand Rapids is a great city near which to live. It has the wonderful experiences that you'd find in a bigger city with a small town feel. Every time we're downtown for an event, I marvel at how lucky we are to have a city like this. We have a top notch symphony (with which I am honored to perform several times a year) and quite a few events that bring thousands of people into the downtown area to just experience the life. We have had many awesome experiences downtown such as ArtPrize, museum visits, bike racing through the streets, and so many more than I can think of.

And this past weekend was another one that we've experienced several years in a row. Festival of the Arts is an all-volunteer arts festival in Grand Rapids that runs for three days with four different stages of acts running continuously all day and evening.  In addition, there are kids activities and about two dozen different food booths sponsored mostly by local churches. 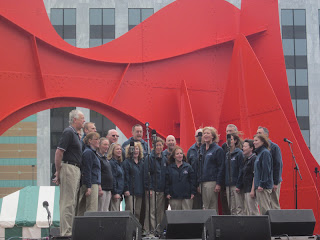 Hubby's singing ensemble performs each year and we head down to enjoy the ambiance.  Steve sang the opening solo and the second one as well, which was kind of neat. This was the group's second year performing on the "main" stage so they were pretty excited.


Meanwhile, the kids spent time, as they do every year, climbing a pyramid sculpture downtown and sliding down it, climbing trees in the nearby courtyard,  and basically running around in the beautiful weather. 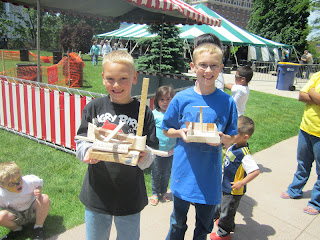 Following Daddy's performance, we headed over to kids activities. This is fun because I have pictures of the boys participating in this activity every year since Noah was four. They started out with wood working and then followed by painting. This activity center is pretty cool since it is a "No Adults Allowed" center and kids are allowed to create to their heart's content. The sculptures this year were pretty cool. 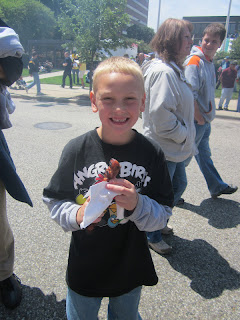 Then it was time to find something to eat. At that point we were all pretty grumpy but as we were all grumbling in hunger, the boys' attention was caught by a nearby acting troupe and while they were looking on.

Hubby went in search of some vittles. He came back with a skewer of chicken. After giving me a small taste I decided that I too NEEDED one :) And after sharing a small bite with Aaron, he too decided he NEEDED one. And after he had inhaled his chicken on a stick, he spent  the remainder of the weekend (yes, I said WEEKEND) talking about his chicken on a stick and how he wanted some more. 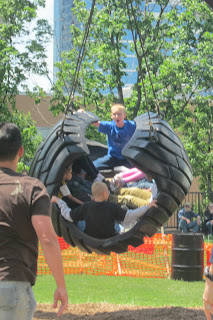 No trip to Festival is complete without a ride in the HUGE tire swing. Since the boys were the biggest boys in their group, they both took the ends and Daddy got a major workout with another dad getting them going.

It was a fun visit to Festival. Every time we go to an activity downtown, I just think about what a cool city we live near and all of the things we do as a family in this city.

By the way, this is not a sponsored post. I just really like hanging out downtown :)
Posted by Kristi at 1:07 PM

I've never been to Grand Rapids, but always heard good things about it. Perhaps I should take a road trip there once I get settled back in the midwest!