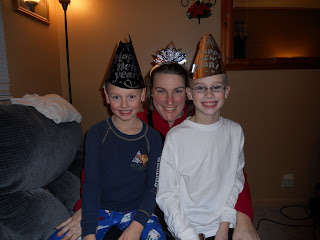 I struggled with whether to share our New Year's Day activities today as a new year's post or tomorrow as a Tackle It Tuesday. Tomorrow wins so stay tuned tomorrow for the adventures of drilling holes in our floor.

But for today, I will just say that it is the third day of the new year. I am feeling hopeful for this year. It's about four hours after I sent two boys back to school, neither of whom was happy to be going unfortunately. I also have a few lingering Christmas decorations lying around. I have laundry piled up (although not at the bottom of the stairs anymore (see tomorrow), and so many other things that have been neglected during my stint as a third shifter.

And I am surprisingly content. Oh, there are plenty of reason to NOT be. I have no job now and no way to pay bills, but that will hopefully change at the end of the month when I start subbing. I have a ton of things that need to purchased with very little money to do so. But I know after last year that I will get by getting what I need when I need to. I am amazed at how much more relaxed I was this weekend knowing that I didn't have to go into work each night. I didn't realize how stressful that had become until it was no longer there.

As for New Year's Eve, we did nothing. It seems as if most of my FB friends allowed their kids to stay up (or try to stay up) until midnight. It makes me look like a pretty big heel that our boys still went to bed at normal time. But unlike past years, Steve and I actually made it to midnight. And we decided that next year will 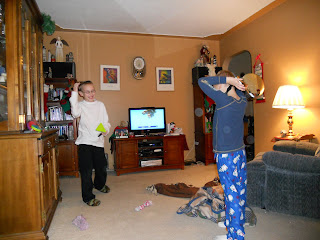 be the year to try it with the boys.

But we still got annoying noisemakers and hats for the kids. We watched Pirates Who Don't Do Anything and the kids rocked it out with the Rock Monster at the end.

And then yesterday, we did our ONLY family activity of the entire Christmas vacation and went to Kalamazoo for a visit to the public museum that the boys like. Afterward, we drove around our alma mater and showed the boys numerous places where Steve and I had lived, where we worked, where we met and "fell in love" and even the church where we got married. We were amazed to see how much the campus has changed and then we realized that it has been 14 years since we were last students there. Afterward, we had dinner at Noodles and came home.

So sending the boys off to school today was interesting, They actually did okay mood-wise and they both have intentions of being well behaved today (I guess we'll see) and I am sitting here, still in pajamas, figuring out which of my list to tackle today.

Or maybe I won't tackle anything. I have three weeks left of nothingness. Maybe I'll start getting things done tomorrow.

Either way, Happy 2011, a year that holds possibilities beyond my imagination.

Happy New Year Kristi! My kids went back to school today too, and I am so happy to get back to a normal schedule!!
Your previous post mentioned wanting to stay in a hotel sometime this year. My sister works for the Hilton and I would be more than happy to get you her empoyee rate if your interested. It works for any Hilton, Hampton, DoubleTree, Homewood Suites, or Embassy Suites. I use it all the time when we go to Orlando!! Let me know if there are any in your area if your interested!!