I was first introduced to Chicago Math (Everyday Mathmatics) in 1996 when I was student teaching in a first grade classroom. I thought it was a great program and was fun. I didn't understand why so many kids struggled with it. But at the same time, I am a true GEEK who has always loved math. But I just saw how it encouraged higher order thinking rather than straight regurgitation of facts and always loved that.

Fast forward a few years (okay, more than a few) to Noah starting school. His school uses Chicago Math and I was amazed at some of the things he was bringing home in kindergarten that they were doing. And I was even MORE amazed that he was understanding them. For those of you unfamiliar with it, it is a math program that uses lots of manipulatives, but also out of the box thinking. Where most math programs are pretty much straight "Learn the facts, memorize them and repeat them back", Chicago Math makes you apply the facts to problems in different contexts and encourages thinking beyond fact recollection.

As the years went on, he came home in first grade learning fractions and second grade doing geometry. As amazed as I was, he was able to do it and I figured that it was better that they learn it now before they realize it is hard.

Now that he is in third grade, I am finding my first "concern" about Chicago Math. It is in the form of multiplication. I completely understand the reason that they are teaching it this way. They are teaching math families of multiplication and division together. Completely reasonable and totally makes sense. The only problem is, it doesn't seem that Noah is learning multiplication tables. He stops to "figure out' the answer when I ask him a problem, rather than memorizing the facts.

The child does not seem to believe me that EVERY adult he knows had to spend time at his age memorizing these facts. When I say, "let's work on memorizing your times tables", I am met with full fledged temper tantrums.

I must pause here to say that the child has straight A's in every subject this year and with the semester ending next week, it looks as if he will have a straight A semester. So in all actuality, I have no basis for complaint whatsoever. The teachers are doing a remarkable job and he is learning at a very fast pace.

He brings home these "Mad Minutes" which are the equivalent of the timed multiplication tests that we had as kids. And he has pretty much the same 3 or 4 problems wrong every week.

So I decided that I would wage war on multiplication and figure out ways to have him learn his multiplication tables. I bought flashcards and told him that we were going to spend a meager five minutes every night practicing a few. He still threw a fit.

So then I decided to try another idea. Each day he has a perfect behavior day at school, we will NOT do multiplication. I figured since he generally flips his card at least two or three days a week, it was a simple way to MAKE him practice.

Instead, the stinker is in his second perfect week of behavior at school. I am not sure if it's because he is determined to NOT practice multiplication or because he's growing up (or a combination of the two) but I found it was time for drastic measures. 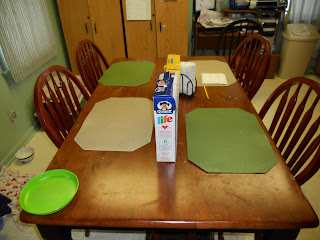 as I was making breakfast I had an idea. I know everyone else probably has nice kids who get along in the morning but not here in the Wheelz home. I am not sure why but the breakfast table is a battle between the boys every morning. So I have started putting boxes of cereal between them in the morning. It stops the "Mommy, he's making a face at me" fights. Yes, I know it is sad that I have to do that, but anything for a peaceful morning. And I have lots of memories of my brother and me doing the same thing as we were growing up. We even played alphabet games while we were eating. (Of course, he ALWAYS won, but that's a different story) 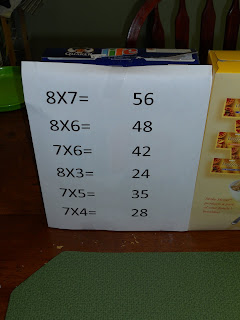 So today I got another idea. I went to the computer and typed up several problems that he seems to consistently get wrong. I printed them out and taped them to one of his boxes. Am I really dense enough to think that he's actually learning them? No, of course not. But you never know.

As for Aaron, Chicago Math will be a challenge. But that is a story for another day. But I do have to say, that the few problems that I HAVE managed to teach Noah, little brother has learned them too and is shouting the answers right along with him. Memorizing is Aaron's strength.

Does anyone else have fun ideas for memorizing multiplication tables? I'd love to hear them.
Posted by Kristi at 6:27 AM

I think that is a clever way to get your son to acknowledge the tables he needs to know. I also think that trying to stay ahead of his little brother will spur him into wanting to get them memorized.

I personally am terrible at math. My mother spent hours and hours with me and flash cards. I still don't have confidence that I have memorized them correctly and revert to addition and counting on my fingers.

Do they make DS games with math? Or create some real life situations that he enjoys and show him how multiplication knowledge makes problem solving easier - like if you are hosting a party for all of the 3 local scout troops, and each troop has a different number of scouts in them, multiplication can be a quick and easy way to figure out how many party favors to have on hand so no one is left out, etc. Games that present them in a fun way make it less of a chore and allow them to focus on learning.

Great way to kill 2 birds with one atone, Kristi! The cereal/times table idea is great!
Xoxo

Hi Kristi, Our schools do everyday math and I love it. It has been fabulous for both boys. However, last year they added Rocket Math to the mix. They also felt that the kids weren't learning the basic facts well enough. WE really like the rocket math program of timed tests. If you want to get some worksheets the website that has some great worksheets and follows the rocket math program pretty closely is http://www.dadsworksheets.com/. I also agree with finding and playing games that use math facts. Good luck!

What a great job you are doing thinking out of the box about this math issue... I do not enjoy math...so this is a tough one for me. I wonder if there is anything on Youtube...
I have found AMAZING things on Youtube...