So I was a bit AWOL from the blogging world last week. We had TWO VBS's last week. Normally, I would never have had the kids attend two in one week, but circumstances really made it necessary.

One of the things that made it crazy was that BOTH VBS programs had a "uniform" shirt that the kids wore each day. This, added to the outfit that each of them insisted on changing into during the afternoon, produced three outfits for each boy each day. I was washing purple and orange shirts every day all week.

The morning program was a community wide program called KidsGames. There are about a dozen of them across the West Michigan over a two week period. This was the ONLY one that was held in the morning, and also held in the same city where they boys go to school. Noah saw four other girls from his class, which made him very excited.

Rather than a typical VBS program, the kids pick a "track" in which they want to participate. The last hour is spent doing the activity that they picked. There were about a dozen different activities to pick from. I laughed when both boys picked activities where they ended up being the only boy in the group. I am glad that it didn't phase either one of them. 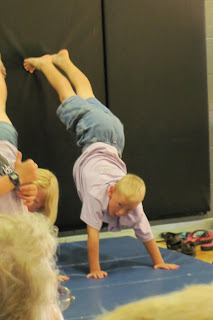 nastics. Although he really didn't learn a whole bunch, since he really just wanted to practice the moves he already knew how to do, he was so proud to have learned to put his hands up before and after each roll, as well as point his toes. 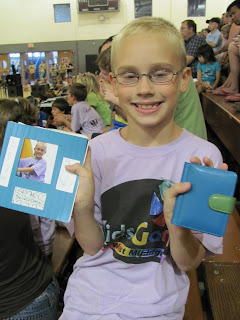 ooking. He LOVED it.He came home begging to use my photo cutter and double sided tape. They spent the first day taking pictures and the rest of the day putting together their albums. He is so proud of his finished product. He was even more excited when the teacher gave each of them their own "picfolio" to keep on the last day. It is currently filled with his Pokemon cards.

One of the days each year they bri 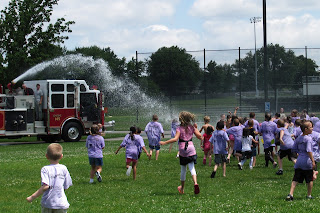 ng out the city fire truck and it lets loose with the hose and soaks the kids. You've never seen anything like 300 kids happily screaming and running from a hose. Noah said he will never do it again since while all the kids were running he ran head first into another little boy and got hurt. Aaron was in heaven, getting sopping wet. 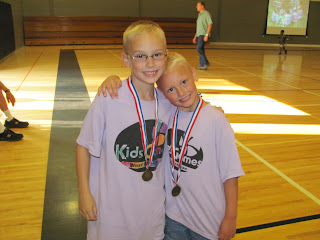 was Friday night where we went back to watch a presentation from all of the tracks. The boys were excited to receive their medals for participating for the whole week.


After KidsGames each day, we came home for lunch and some down time. But as soon as dinner was over each day, it was time to don our second "uniform" shirt for the week and head off to VBS Number Two.

Mega Kids Camp was held at our 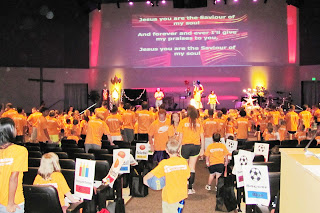 new church. Even though it meant a very tiring week, I felt it was importantt for us to go to start meeting people at our new church and help the boys to get even more comfortable with their new surroundings. It turned out to be such a great idea.

The boys had a BLAST! It was another program where kids pick an activity that they enjoy and do that activity for the entire week.

Aaron originally signed up for first grade basketball, but when I got there after work on the first night, I saw him walking inside with a leader crying. It was clear that after a busy morning, he wasn't quite ready for that yet.

So I moved him into the pre 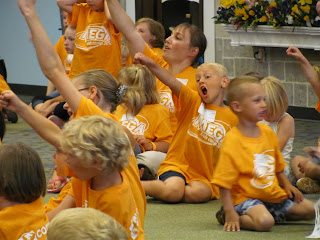 school/kindergarten program, which was a typical VBS program. He was much happier and jumped right into the music with gusto. He was very happy the rest of the week and I was able to volunteer the last two nights as well, which was nice to finally start meeting some of the adult leaders who are involved at Cornerstone. 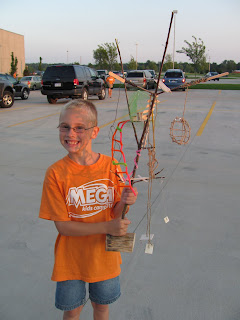 o woodworking. He loved it too. They made a miniature tree house over the course of the week. He is so proud of his creation. He has been playing with it with lego guys, super heroes, and even the HAMSTER.

The music was ROCKIN' Loud, crazy, and fun. I video taped several of the dance songs and the boys are having a great time dancing to "Drive the Bus". If you are familiar with this, you know what I'm saying. If not, you've GOT to see it. It's crazy!

The boys were e 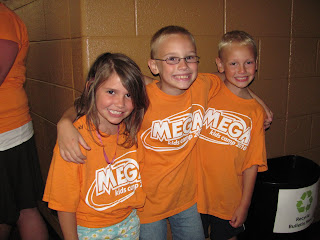 ven more excited when Noah found a little girl from his class that he is good friends with. Turns out they recently started coming to this church as well, and even attend the same service (there are three each Sunday) as we do. Noah had been begging for a play date with A since school got out and she had been calling and missing him since them as well. We were even able to figure out a play date for them in couple of weeks after church.

It was really an amazing week. I'm not sure if we will do KidsGames again next year or not. Probably only if it is a different week from Mega Kids Camp. But the kids handled the sleep deprivation okay and we have this week to recover from the craziness before next weekend and next week's numerous activities (more about that to come).

Have a great Monday.
Posted by Kristi at 5:57 AM

Wow! What a crazy week. Looks like the boys had fun though and that's all that matters.