Yes, Steve broke down and we have a new m 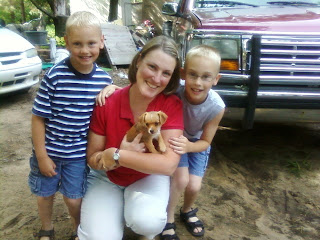 ember of the Wheelz Family. I've been talking about wanting a puppy for some time now but it was just so expensive that we couldn't do it. Yesterday, while we were waiting to pick up our kids, (another story that is itching to be told), Steve and I were wandering around a Tractor Surplus store (don't ask) and saw a girl walking around with an ADORABLE puppy. She had just gotten it from a family that had puppies about five minutes away. They were selling them at a super low price since they were mixed breed mutts. It seemed like maybe our time was finally here. The cost for her start up needs were small since she didn't really need much.

Then, he finally said we could leas 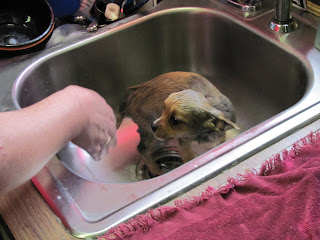 t least go look at them. I figured if they were all aggressive around the kids then it would make the deal broken and we could go on with our lives. Unfortunately, that didn't happen and every single one of the puppies settled into both Aaron's and Noah's arms. It became pretty clear that one of the puppies was coming home with us.

They told us that the puppy has fleas and had one flea bath already. We went BACK to the Tractor Surplus Store to get the bare minimum of what we would need for this pup, which included flea shampoo. After a 45 minute trip home in the car in my lap, the first order of business was a trip straight into the sink for another bath.

I don't know the first thing about 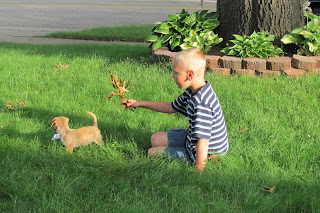 training a puppy. We are in WAY over our heads.

But we took her outside last night to play with her and the kids were fascinated that a 10 week old puppy was running to fetch huge twigs and bring them back to us. The neighbors came over to make her acquaintance as well. One of our neighbors is a true Dog Person and she gave her the once over. She needs A LOT of work to get her healthy and ready to be a family member. And a lot of vet bills that we really shouldn't be incurring at the moment. 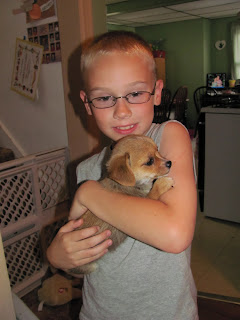 Yup, suffice it to say, I really screwed up this time. Now we have this adorable little puppy that needs shots, check ups, etc and eventually spaying. And it doesn't seem to want to go potty outside even though I keep taking her constantly.

While we were trying to sleep last night and she was crying in her crate, I was reminded of the moments when we first brought Noah home from the hospital as a newborn. We had NO CLUE what we were doing. And we got through it. So that's the comfort I'm trying to give myself right now. We'll get through this and come out on the other side with a wonderful family pet.

But for now, I have once again put ourselves over our heads, both in financial and emotional turmoil just because I wanted a puppy.

But, here she is.

Silly Lily as she has become to be 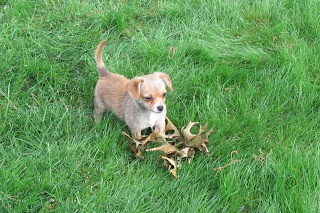 She's adorable! The training just takes some time (but not as much as it takes some kids...like my son-LOL!) Enjoy her! :-)

Congrats on your puppy!! We got a puppy in March. I solved the crying at nighttime by having the crate right next to my bed so he can see me and hear me.
In the beginning I took him outside every 15-30 minutes to pee or poop. And have a treat with you to reward him EVERY time he goes outside. I used Pupperoni and broke them in little pieces.
Have FUN!!!

Aww, nothing more precious than a boy and his puppy!

Are you getting any sleep? I remember when we got our puppy, he cried all night and I ended up sleeping on the floor with him!

Puppies learn quickly! Would be good if you could find someone experienced with dogs to help you train him. Also, expose him to many different situations and places and people during his first six months.