Sunday night as we were sitting down for dinner, the usual debate over which prayer we would do before our meal began. Instead of deciding the argument, we decided instead to go around the table a few times and mention things that we did over Spring Break that we were thankful for. Kind of a way to sum it all up before heading back for the last 8 weeks of school. Even though we didn't go anywhere, we definitely kept the week pretty full of activities. 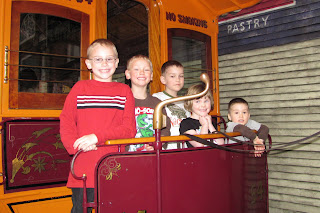 ith my brother and his family being here for Easter. We were able to spend some time with cousins each day, which I mentioned last week. We also got a chance to go to "How to Train Your Dragon" (great movie, BTW) with grandma and a younger cousin, which the kids liked. They also got to ride a carousel with grandma and their young cousin, and got me on it as well. 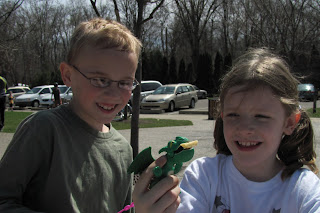 h a very full day at a park nearby, we spent some time with different friends throughout the week. We went to the new Alvin movie with some friends that we don't really get together with much anymore and the kids also got to see some other friends at a skating party on Saturday. In addition, some outside time playing with the neighbor kids rounded the week off quite nicely.


3. Inside Time
Two of the days were really cold and we were scrambling for things to do. By Thursday, the kids were getting pretty antsy, leaving questions about how summer vacation will go this year, but that's a post for another day. So I packed them up Friday afternoon and took them to an indoor play place to run off some steam for a few hours. Steve also signed us up for a promotional package through his work (he works for a cable company) and for very little additional money than we were already paying, we now have WAY TOO MANY cable channels, resulting in more new shows being watched than I would prefer. Gotta get a handle on that soon.

2. Outside Time
We spent the majority 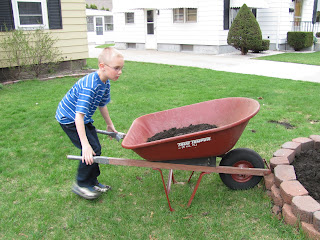 of both weekends outside, but this past weekend Big Time. The weather was in the mid 60's and beautiful and I always get motivated in the Spring to fix up the yard. Our grass took a beating from the mole population and I have been itching to begin repairs. Along the way, we ended up with a huge weekend outside project. I will share the full project for Tackle It Tuesday, but I can tell you it involved lots of dirt and worms. I bet you just can't wait, huh?

We also spent some time with the boys at the park practicing hitting, and throwing for little league.

1. Game Time
For the last couple of months, we had been doing family Wii night on Sunday nights when we used to do board games. The boys and I played several games throughout the week which made it very clear that we need to be doing it much more. We need to work on learning to encourage each other, refraining from bragging, work on taking turns, etc. I got a new Trouble game, as well as teaching the boys how to play King's Corners with cards. That, along with a few others, made games a big hit and I hope to continue it.

The Week Ahead:
It's going to be a crazy one. I got an accompanying job for the week which is going to fill both my mornings and afternoons, as well as Thursday evening and Saturday all day. Aaron also has Kindergarten round-up and little league for both boys is scheduled to start this week.

I also want to share with you that we tried a new church this weekend. It's a full story, but we are definitely MUCH closer than we have been as of yet to finding a new church home.

I am in the depths of laundry, both because my washer doesn't work anymore so I have to double spin and dry everything twice, which is making laundry take forever. On top of that, I need to wash all of the warm weather clothes. If this week wasn't so crazy, I would just try to fit in a trip to the laundry mat. It may actually have to be in the cards for next week. Yuck!

So I have lots of pictures and stories to share, but I am off to bed for now.
Posted by Kristi at 8:29 PM

WOW you guys did alot...
I am exhaused just reading about it!
I can't wait to hear about the church :)