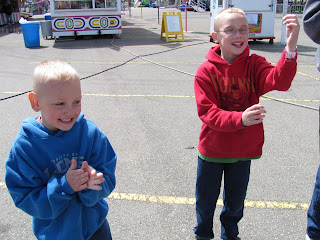 It's 18 hours later and my head is STILL spinning and I still have an upset stomach.

Think I have the flu?

Over Spring Break while I was checking a couple of local websites for something fun to do that day, I checked my FB updates and found a contest sponsored by Maranda, a local TV personality. It was for a family fun pack of tickets to a local carnival.

I generally stay away from these carnivals like the plague. Every time we pass them in parking lots, I call them "stinky carnivals" and the boys get the hint that they need to stop asking because it's NOT going to happen.

But I was itching for things to do and I usually never win anything so I went ahead and entered. About 45 minutes later I got an email saying I'd won. Great... now I actually have to take them. 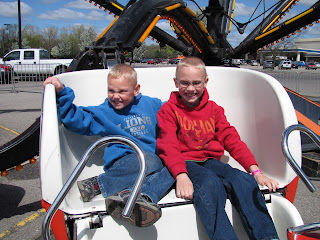 Yesterday was the last day of the carnival so we finally took the boys. They were excited because usually if we do see one of these, they're allowed to ride maybe one or two rides and they are left wishing for more but mommy and daddy refusing to spend that kind of money. It really was a treat to actually be able to answer "yes" to everything they asked for. It was a big change and one that the kids definitely savored.


The very first ride we approached, the boy 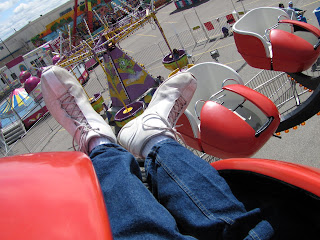 s decided that they wanted to ride together. Steve and I got in the next car and laughed when Steve's feet had to hang out because he was so tall. After about 10 seconds into the ride, Aaron was crouched down in his seat, crying and screaming in misery. I was in the next car worrying about him when I heard, "It's okay Aaron, it'll be over soon" and then not only was Noah comforting his little brother, but putting his arm around him at the same time.

Wow, they really do love each other. Who'd have ever guessed :)

Now Steve and I were both sick to our stomachs and looking for things for the kids so we could take a break. We came to the "funhouse" of which we've seen at every carnival we've ever passed but once again never justified the money to let the kids enter.

Not this time. After 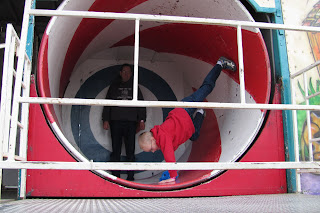 going through very hesitantly the first time, this became the one thing that they returned to again and again, every time Mommy or Daddy started feeling sick again, which was A LOT. They especially loved the rolling barrel at the end and Noah got pretty daring with his tricks. It was Steve that realized that we probably should have had Noah take his glasses off during this, but it was fine.


It was funny watchin 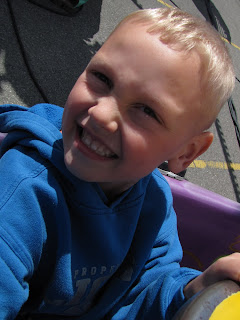 g Aaron with all of the height requirements. He is EXACTLY 48 inches, so he squeaked by to ride the bumper cars where the MINIMUM is 48"

After about an hour, I was DONE. I still can't believe how sick I got and Steve was not feeling all that great either. Aaron was begging to go on the teacups again, which is the one that sent both Steve and me over the edge, but I figured I could deal with it one more time. It's a good thing he loved it because I actually had to sit down on the ground for a couple of minutes when it was over I was so miserable. 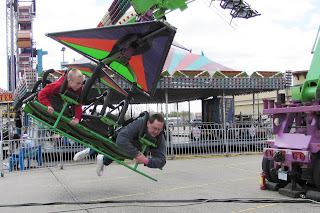 to watch Daddy and Noah on the flying ride while I was recuperating. Even though technically Aaron was tall enough for that one, this over-protective momma wasn't about to let him on it. I was so scared he would go flying out the back or something. Yes, I really am THAT neurotic.


The one discussion that we had before we lef 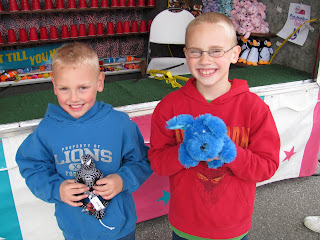 t for the carnival was that we were going to ride rides but there would be NO begging for games or stuffed animals. Noah is the most guilty of that most of the time. He actually obliged and I decided to go ahead and reward him. The carnival was actually pretty much dead because of the press. Yup, it had been shut down the Saturday night before because of some teenage gangs causing trouble, so the attendance was way down. So because of that, the game dude was very willing to negotiate and I managed to negotiate a guaranteed larger prize for both boys for the cost of one game.

So not only did the kids FINALLY get to ride on everything they wanted, but they even got to leave with new "buddies". After two hours, and mommy and daddy feeling REALLY awful, we told the boys we needed to leave and get a snack and then maybe we'd come back. Luckily, with the promise of ice cream, it wasn't that hard to pull them out and while we were having our treat the kids really didn't cause that much of a stink when we told them we were going to go home instead of returning to the carnival. I think both of them could see just how sick their parents were.

By the time we got 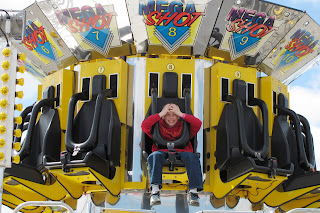 home, my head hurt so bad and Steve was falling asleep. We put Bolt on for them and both went to bed. After we got up, Steve was feeling a little better and I was trying to, but we really both felt the remnants from the rides for the rest of the night.

As I sit here writing this, I feel myself getting queasy again just thinking about it. I was really glad that for the first time ever, I could say "yes" to the boys when ever they asked to do something, but I also and a little surprised at how badly the thing affected me. Hopefully, when we pass carnivals from now on, the boys will remember yesterday and the fun they had, but also know that we will not be visiting one again.
Posted by Kristi at 5:49 AM

It sounds like a lot of fun! At least for the kids. I'm the same way with rides for my boys. It's way too expensive and they always want to ride more. It would be fun to let them ride whatever they want, but it would only be dad riding because this momma would be seriously sick!

I used to love carnival rides when I was a kid but for the past 20 years I've been the same way - even the carousel at the mall makes me sick. I'm really disappointed that I won't be able to go on all the rides at amusement parks with the girls when they get older. :(

Aaron is exactly 48 inches? So is Hannah! And she's 2 years older - guess it's that he's tall for his age and she's average to short for hers. ;)

WOw, sounds like it was an epic event, this carnival! --
Glad you all made it through and your pictures were AWESOME!

I get sick on the swings ...I really understand that yucky feeling!