About a year and a half ago, my husband called me on his way home from work.

Sure enough, I went to go pick him up and his entire back window had just burst into a bazillion pieces, just out of the blue.

Pretty strange, I know. After driving around with various plastic coverings for probably close to a year since his truck only has PLPD insurance and we couldn't afford a new one, he finally found a junk yard with the right glass and a friend to install it at a fraction of the cost.

And we went on with our live 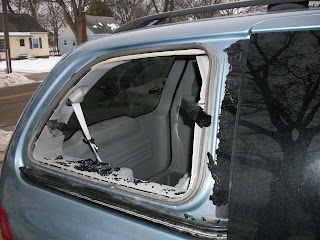 I had gone to pick up Noah from school and thankfully Aaron was able to stay home since Steve had gotten home early. Just as we were sitting waiting to turn onto our street, we heard a huge BOOM. I thought we had had gotten hit by another car until I realized we didn't feel anything, and then I looked back. The passenger window had BURST. Just like Steve 's back window had a year and a half ago. On the same street that his had a year and a half ago. 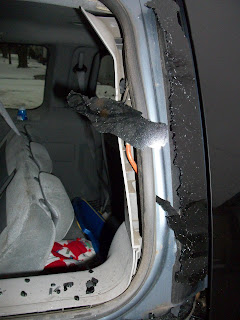 Luckily (I think) this time it is on the vehicle that has full insurance but now I have to worry about our rates going up, when we are really not even making our monthly bills as it is. I just needed one more worry.

So today, among trying to convince the mortgage company that they don't REALLY need money for another month, volunteering in Aaron's class, and taking a brand new camera (thank you warranty) back to the store three days after I got it because it is making funny noises, I also need to make a block of time to be home for the glass place to come replace the window. I can't believe that the smallest window on a van is the most expensive, just because it is "specially shaped" and "privacy tinted". It's not like I ASKED for privacy ?!

As annoyed as I am with this expense and inconvenience, I am still thankful that the glass was in the way back and didn't fly up and hit Noah and I am also VERY thankful that Aaron wasn't in the car. He would have flipped out.

Mixed blessings, I think.
Posted by Kristi at 5:40 AM

That is so strange! I've never heard of that happening before and the fact that it happened twice and on the same street! It would be interesting to know if it has happened to other people's vehicles on that street.

WOW! I've only ever had something like that happen once and it was after my car had sat in a hot parking lot all day while I was at work. I can't imagine having a window blow out like that, while you were driving and had Noah in the van with you! I'm so glad that everyone is ok and that the insurance will cover the repair. That's just freaky...

bummer about the window... it makes me wonder if -- someone on that street has some super..sonic.. stuff going on that breaks windows?
I would avoid that neighborhood if I could... but I am ...weird like that! :)

Did you ever contact the car manufacturer to alert them to the issue? If it wasn't already happening to others and being reported, you should let them know what happened since that sounds like a very dangerous issue that should be covered under a recall. I'm very glad no one was hurt when it happened and sorry for the huge inconvenience to you and your family.