It was a strange day and night on Christmas eve this year. Usually, we are struggling to get everything done to get to church by 4:30 for the 5:00 service, since the kids are usually somehow involved in the service.

This year, we were planning to visit a church for Christmas service since we are no longer attending our church home of ten years, but we finally decided to just have a year of being at home and doing our own "worship" of sorts and next year when we find a new church, we'll have a home to in which to worship again. 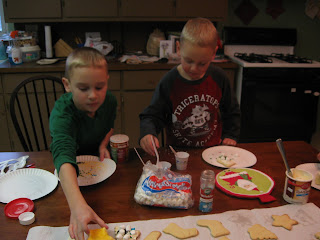 The day started out with two little boys extremely antsy and I definitely wondered how we would get through the next 12 hours. I knew we needed to make cookies for Santa, since we hadn't, so that became our first task. 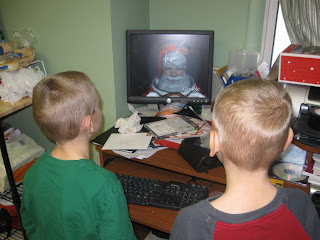 One thing that passed the time throughout the day was checking the NORAD website and tracking where Santa was at any given moment. This website was so cool. Not only did it show where in the world Santa had already been, it also had little minute long videos about different landmarks at different places around the world. The boys loved watching the movies and I think I learned a few things too. 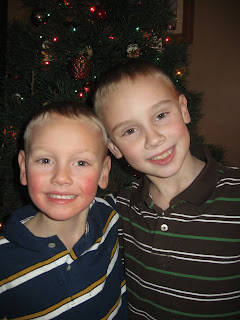 In the last few years, we have only gone out to a "real" restaurant once or twice a year, so we decided to keep our Christmas Eve tradition of eating out, and headed out early (due to a winter storm working its way in) to a yummy Mexican restaurant that we like. But not before getting a Christmas Eve pose in front of the tree. 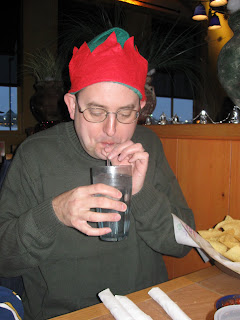 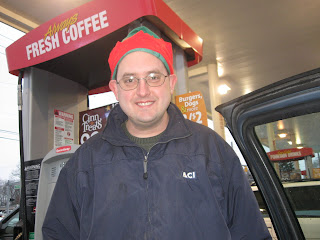 We had to stop for gas, where Steve decided to don the elf hat that Noah had worn for his Christmas program at school, and continue wearing it for the rest of the evening. 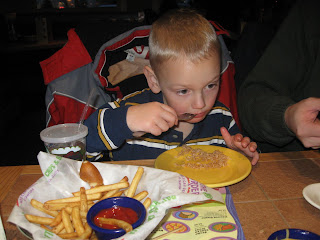 The boys did a great job in the restaurant, ordering their food with fries. The funny thing was when it came time to eat, both boys didn't want anything to do with their fries and ended up begging me for all of the rice on my plate. I guess next year they get rice for their side. 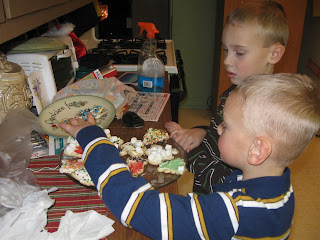 After making our way through the freezing rain that was coming down, we were ready for setting out cookies for Santa 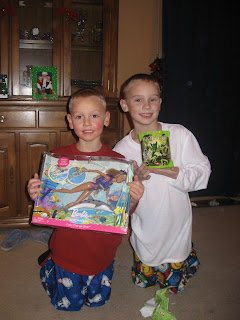 and then on to opening presents. Unfortunately, two little boys decided to tell each other what they had gotten for each other, so a bit of the element of surprise was gone. But nevertheless, they were still excited to open their gifts for their brother. 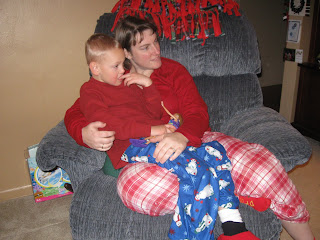 Since we hadn't gone to church, it was still pretty early so we decided to settle in to watch the movie "Veggie Tales Tale of St. Nicholas". We really enjoyed that movie this season and it was kind of neat to see how "Santa Claus" fits into the Christmas story.


Afterward, we turned the TV off, read the Christmas Story from the boys' Bible (even Aaron took a turn reading this year) and then sang some carols together. Our local Christian radio station played a lot of traditional hymns sung by contemporary artists, so the boys actually learned the words to the real Christmas songs this year. So the four of us sat on the couch and sang as many carols as we could before it was time to turn in.

Side Note: The night itself leading into Christmas was a little bit more challenging, as Noah decided to wake up at 3:00 and never go back to sleep, keeping me awake, and sometimes Steve as well. We were all a little grumpy the next day, but I am trying to put that part of Christmas 2009 behind us.

Steve and I have both commented that not going to church on Christmas Eve definitely took away a lot of the special feeling of Christmas, and I really hope that we can find a church soon after the start of the new year so we never have to feel this lost again. But we made the most of it and I think n the boys will still have some nice memories of Christmas Eve this year.
Posted by Kristi at 3:52 PM

I wish you were closer and I'd invite ya'all to our church-- :)
I think that the boys are seeing that family is as important as church.
By the way that pic of the boys by the tree is a keeper!
Daddy in the elf hat... very "cool"!