As I sit here, I have just drooped Aaron off at school and am looking around the house at everything I should be doing in the two and a half hours before I need to return to fetch him.

Yes, everything is an absolute mess. But I am actually pretty content.

School has been in session for one week. In that time:

A. Noah LOVES his teacher and has received more "stickers on his pocket" than anyone else in his class for good behavior

B. Aaron is singing songs every day that he has learned at school

C. Our first bell performance is under our belt

D. Noah got all of the words right on his first spelling list for second grade (and was excited that he was the only one who spelled the word "through" correctly) 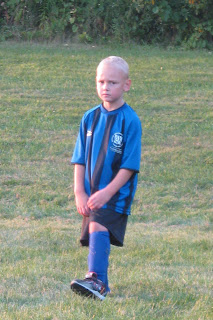 E. Aaron has started soccer (although we need to work on his attitude toward participation a little)

F. I am happy with my decision to wait one more year until I re-enter the daytime work force

G. Noah has been ready for school, including breakfast done EVERY day since the start of school, with the help of a sticker reward chart that is DIRECTLY proportional to the amount of allowance he gets Saturday mornings

H. Aaron is pronouncing some words better than he ever did before, and is correcting himself once in awhile as well.

I. I have all music for both choirs I'm directing at church picked out, copied and planned, ready for rehearsals to start in two weeks.

Yup, things are in full swing. I know Steve isn't mentioned, but he too is doing great getting into the swing of things with the new schedule, including having to take both boys to Aaron's soccer games by himself on Thursday nights.

I have a TON of stuff I need to be doing around the house. But at the moment, it is kind of nice to sit back and reflect on how far we've come. This is the first year that I don't panic about how the day might be going with Noah and I know that Aaron is loving being a part of a class.

That deserves a giant WOOHOO!!

I know the feeling I have found myself at home the last 2 weeks thinking of what I should be doing and instead enjoying the peace that knowing my kids are at school and really happy.

Glad to hear things are going so well for you. Crazy but good!

Kristi, I am so happy things are going so well for you...I really do mean it!